"The Inhuman Torch" is the one hundred and thirty-second episode of Futurama, the eighteenth of the seventh production season and the fifth of the tenth broadcast season. It aired on 10 July 2013, on Comedy Central. Bender becomes a famous firefighter, but the crew suspects him of arson.

At a helium mining facility on the sun, Zapp Brannigan causes a cave-in that traps 15 miners inside the sun itself. Fry, Leela, and Bender venture to save the miners. When Bender attempts to abandon Fry and Leela and return to the ship, he inadvertently saves one of the miners. Prompted by Morbo, who is covering the breaking story on location, Bender goes on to rescue all of the remaining victims. He is hailed as the hero of the day, while Fry and Leela are recognized as his minor accomplices. A fire breaks out at their award ceremony, but as Mayor Poopenmeyer explains, the fire department was sold to pay for Bender's medal. Fry, Leela, and Bender put out the fire, although Bender is very showy about it and once again receives most of the credit. Poopenmeyer decrees that the Planet Express crew are now the city's fire department.

Act II: "I've saved the entire world! And no one will ever know."

After some time as successful firefighters, the other crew members notice that Bender was present just before every one of the fires they extinguished. They ask themselves whether Bender might be setting these fires deliberately in order to inspire continued hero-worship. Their suspicions are confirmed when, while on the videophone with Bender, they see a fire break out in the shop just behind him. When he returns to headquarters, they confront him and kick him off the team.

As Bender cleans out his locker, a strange, blue flame erupts from his shoulder. He tries to extinguish it, but the flame moves around as though deliberately dodging his attempts. Finally, the flame takes on the look of a shadowy face and begins to speak to Bender. It says that it is a "being of pure solar energy," a member of a race that inhabits the Sun's photosphere. It explains that billions of years ago, it was imprisoned for treason, but that Bender has unwittingly transported it to Earth. When it announces its plans to ignite the earth and rule over it, Bender realizes that this creature is the source of the fires for which he has been blamed. When Bender accidentally leads it to the sub-basement and the lava pit, it realizes that it can go to Earth's core and transform the earth into a miniature sun. To prevent this, Bender captures the creature within his compartment of mystery and flees to an ice floe in the Arctic Ocean, where there is nothing flammable. He announces to the creature, which he begins to refer to as "Flamo", that they will be here for the next billion years.

Act III: "You are now the greatest hero in Earth's history."

At home, Fry accepts a package that contains Bender's hero medal, badly damaged in the fire at the Vampire Bank where Bender had kept it. Fry realizes that Bender never would have set a fire that would risk harm to this prize, and flies to the Arctic to retrieve and apologize to Bender. But when Bender explains that "it was a psychotic flame creature from the sun who set those fires," Fry decides that he must have been wrong about Bender after all. Fry angrily returns to headquarters alone.

Unbeknownst to Fry and Bender, Flamo has escaped from Bender and attached itself to Fry's pants. At headquarters, it leaves Fry and ignites the Planet Express building itself. The crew are unable to extinguish the fire, as Flamo eludes their hoses. Just as they express relief that no one is left in the doomed building, Fry appears, hanging from the balcony and in need of rescue. Bender had discovered the loss of his captive earlier, and had left the Arctic just in time to arrive at this moment. He arrives such that only Fry knows of his presence, and quietly pulls him to relative safety. Fry refuses to be rescued, but Bender forces the issue. Fleeing with Fry in hand, Bender falls through the weakening floor, ending up in the sub-basement near the lava pit. Fry scolds Bender sharply and walks out on him, just as Flamo arrives and dives into the lava pit. Fry returns to scold Bender further, but Bender dives into the lava to capture Flamo. Before Fry can leave, a strange light draws him back into the room. Two large flame creatures appear, announcing that they are the "mystic aldermen of the sun." They await Bender's return, thank him for his heroism in capturing their escapee, explain that he is "now the greatest hero in Earth's history," and depart with a bound Flamo.

Fry finally understands the truth, and promises to vouch for Bender to the rest of the crew, but Bender explains that it cannot be. They wouldn't believe Fry either. And in fact, if Fry were to tell them that Bender is even present, they'll blame Bender for the fire. The only solution is for Fry to claim that he himself accidentally started the fire while Bender was thousands of miles away.

On 17 January 2012, Futurama writer Eric Rogers revealed that the episode was being written.[1] On 7 February, an image of the episode's production script cover was posted to Twitter, revealing the episode's title.[2] On 11 December, executive producer David X. Cohen revealed the episode's plot in an interview with Crave Online.[3]

On 5 February 2013, Vulture.com released a preview clip for the tenth broadcast season,[4] which contained footage from the episode. 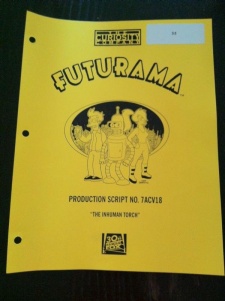 The cover of the episode's production script.[2]

Professor Farnsworth: We can't have an arsonist in our midst. We can have four idiots and a fat guy, but no arsonists!

Fry: Someone save me! I made a rope from my clothes, but then this fire started.