"Lethal Inspection" is the ninety-fourth episode of Futurama, the sixth of the sixth production season and the sixth of the seventh broadcast season. It aired on 22 July, 2010, on Comedy Central. Bender discovers that he was built without a backup unit and can, like his human friends, therefore die. Together with Hermes, he seeks out the inspector who originally approved him, despite knowing his flaw.

The Planet Express crew participates in a Sith Invasion re-enactment.

The episode opens with the Planet Express crew participating in a re-enactment of the Sithal War; Fry and company are dressed as Union soldiers, while their opponents are nerds dressed as Sith from Star Wars. During the course of the battle, Bender is "killed" and melodramatically acts out his death scene, laughing off the entire affair. Fry points out that Bender would be much less amused if he were actually dead, but Bender counters that as a robot, he is functionally immortal; his computerized brain is backed up on a daily basis, and if his physical body is ever destroyed, his mind can simply be downloaded into a new one (which might explain his sometimes nonchalant view on death). Based on a cost-per-casualty analysis of the conflict, Hermes awards victory to the Sith, and the two sides congratulate each other on a "good war".

Back at Planet Express headquarters, the weary and bruised crewmembers recuperate from the injuries they sustained during the re-enactment. This only causes Bender to continue to gloat about his supposed physical superiority, as he claims to be of perfect construction, and has a quality assurance slip from the day he was built (which simply reads "Approved by #5") to prove it. As he retrieves a wheelchair for Professor Farnsworth, however, Bender unexpectedly springs an oil leak. An inspection by the Professor reveals that Bender is not only a defective robot, but suffers from a fatal construction flaw; he was built without a backup unit, meaning that if he dies, his death will be permanent.

Act II: "Dying sucks butt! How do you living beings cope with mortality?"

Bender has difficulty coping with his new-found mortality, and cannot understand why the human who inspected him would have vetted him as being of sound construction when he clearly isn't, blaming the bureaucratic nature of the inspection process itself. This prompts Hermes to escort Bender to his office at the Central Bureaucracy, so they can track down Inspector Five and determine why he certified Bender as a quality robot despite his inherent defect. In his absence, he appoints Leela as a deputy bureaucrat so she can handle all of Planet Express's incoming paperwork until he returns. Bender attempts to log on to the computer in Hermes's cubicle, but Hermes says that only the bureaucrat assigned to that particular computer can access the system. This proves moot, however, as the Bureaucracy's records of Inspector Five have been deleted. Bender and Hermes search the file archives for a hard copy, but this too is inexplicably missing.

Crushed by the apparent hopelessness of the situation, Bender enters what Hermes assumes is a suicide booth, only to be told it is actually a phone booth (Hermes, who is surprised to learn that "phones come in booths now", promptly discards his much more compact cell phone). Bender calls Mom at the Friendly Robot Company for tech support, informing her that he is a defective robot, but she retaliates with a missile strike that narrowly misses Bender. Hermes informs Bender that Mom cannot afford to have a defective product loose on the streets, and will kill Bender in order to protect her reputation. Fleeing the pursuit of Mom's Killbots, the two of them hop a train (the Transcontinental Underground Railroad) and instantly find themselves at the Mexican border, near Tijuana. Bender, who was constructed in Tijuana, believes that Inspector Five may still be living there.

Despite having been his inspector, Hermes chooses to save Bender.

Act III: "Help! I'm gonna die! That's the opposite of what I want!"

After showing their documents to a Mexican Border Patrolman, the pair cross the border into Tijuana, only to find that the local Friendly Robot Company facility where Bender was built has been shuttered for years. They discover a discarded employee directory in the garbage, which provides a street address for Inspector Five; this leads them to an old, dilapidated house that has long been abandoned. Hermes advises Bender to give up the search, as there is no trace of Inspector Five, and it is clear that the house has not been lived in for some time. Bender sinks to the floor, overwhelmed by the crushing burden of mortality, believing that he, being Bender, should naturally be entitled to the same privileges as any other robot, if not more. Hermes consoles his friend, telling Bender that even if he is mortal, he is still unique, and that he will always be Bender; no one else, not even Inspector Five, will ever be. Bender is touched by the sentiment, and promises to add Hermes to his "do-not-kill" list.

Just as the two prepare to leave, the house is attacked by Mom's Killbots after her cameras spotted Hermes and Bender investigating the old factory. Hermes says he will break into the Central Bureaucracy's database from Inspector Five's computer and list Bender as being destroyed, which will cause the robots to break off their attack. Bender warns Hermes that the Bureaucracy computers are hack-proof, but is convinced to leave when the enforcers rake the house with gunfire. The plan succeeds: Hermes changes Bender's status to "TERMINATED", which makes the robots stand down (although they destroy themselves anyway, as they are prone to open fire indiscriminately at any mention of weapons or gunfire). The house collapses in flames, but Hermes is able to limbo out of the rubble to safety.

Hermes and Bender return to New New York to find Planet Express in disarray; Leela, unable to cope with the torrent of paperwork she cannot understand, has simply been jamming incoming forms behind the office plants while waiting for Hermes to get back. Hermes quickly remedies the situation by throwing most of the paperwork into the furnace. The crew inquires as to whether Bender managed to find Inspector Five. He replies that he did not, but the experience has made him decide to live his life to its decadent fullest. Everyone leaves to celebrate except for Hermes, who stays behind and removes a folder from his coat, adding it to the furnace. The cover of the folder burns away to reveal Inspector Five's true identity: a much younger Hermes Conrad.

Flashbacks reveal that Hermes worked as an inspector at the Tijuana manufacturing plant; when Bender came off the line, Hermes found the production defect, but faced with the choice to scrap the infant robot for his flaw, Hermes chose instead to certify Bender and give him a chance at life. Hermes resigned from the Friendly Robot Company shortly afterward and left his house in Tijuana, where it remained abandoned. During their visit to the Central Bureaucracy, Hermes covered his tracks by deleting his own records and stealing his own file while Bender was distracted; he did not have to hack into the computer at the house because it was his to begin with. The final shot of the episode is of a smiling Hermes nodding toward the burning file, proud of his choice to save Bender. 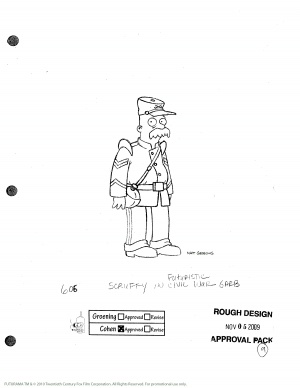 During Comedy Central Insider's release of material regarding the new season, this sketch was released.[1]

One of the early episode plot points revealed was the Sith Invasion re-enactment in the first act, with Scruffy's and Bender's clothing layouts released in Comedy Central's Countdown to Futurama.

The episode was in an early stage called Inspector #5, and the title was copyrighted by Fox before being changed to Lethal Inspection.

In its original American broadcast, "Lethal Inspection" was viewed by an estimated 1.920 million people, down about 300 000 viewers since "The Duh-Vinci Code".[2] When naming the most enjoyed episodes of broadcast season 7 in a June, 2011 interview, David X. Cohen listed "Lethal Inspection" alongside "The Late Philip J. Fry" as some of the fans' favorite episodes. He said it "had a touching ending, which people didn’t see coming".[3]

Bender: [Exits phone booth.] Well, things are startin' to look up.
Hermes: Look up! [Missile explodes.] Who did you call? Dial-a-bomb?

Killbot 2: Cease fire. Mom called off the attack, although I don't see how it's her-
Killbot 3: Someone said "howitzer!" [Killbots 1 and 3 start firing on the middle killbot, eventually blowing themselves up.]

Hermes: They have phones in booths now? Finally! I don't have to lug this cell phone around.

Bender: Anything less than immortality is a complete waste of time!