"Future Stock" is the fifty-third episode of Futurama, the twenty-first of the third production season and the ninth of the fourth broadcast season. It aired on 31 March, 2002, on Fox. Planet Express is taken over by That Guy, who improves the company's image, but he decides to sell it to Mom.

Act I: "Awesome! Awesome to the max!"

Planet Express' stockholder meeting is taking place at the Lodgatorium Comfort Dome Inn, and Fry and Zoidberg get hungry and visit the Bot-Mizwah next door to get some free food, though Zoidberg is not allowed in because they don't allow shellfish (or the pig next to him). Hermes tells the stockholders of Planet Express that the company is on the verge of bankruptcy, while Fry moves on to a Cryogenic Support Group which also offers free food (and bars Zoidberg from coming in, as Zoidberg has never been cryogenically frozen). There, Fry meets Steve Castle (who is never referred to by his name — see Trivia), a 1980s stockbroker who had himself frozen to await a cure for his terminal boneitis. Feeling compassion for his contemporary, Fry invites him to work for Planet Express, and they return to the stockholder meeting where Hattie McDoogal is demanding to nominate a new CEO because the Professor has insulted her cat. Leela, Bender, Amy, Hermes and the Professor (10,000 shares each) vote for Farnsworth, while Fry (10,000 shares), Scruffy (40,000 shares) and Hattie (1 share) vote for Castle, making him the new CEO of Planet Express.

Act II: "I am proud to be the shepherd of this herd of sharks."

Castle is turning Planet Express upside down and blaming everything on the old management, that is, the Professor. He makes Fry his vice-chairman and intends to bring Planet Express right to the top of the delivery business, which means that they have to attack Mom's Friendly Delivery Company. Of course, Mom is not amused to learn this. Castle follows his secret of success, which is that everything is about appearances, and gives Planet Express a completely new look and a completely new image. Zoidberg is not happy about the company's development, and sells all his shares to Castle for a sandwich. Mom is getting agitated about the new "Delivery Kings" that business magazines write about so much (even if PlanEx hasn't made even one single delivery since the takeover), and has a private meeting with Castle after they have a talk at Elzar's Fine Cuisine. As the crew is voicing their concerns about the way Castle is handling business, and Fry is defending him, Castle tells them they are all fired and that Mom is going to take over Planet Express.

Fry insists that he is innocent of the selling of the company, but no one listens to him. He decides to block the takeover, and goes to the Intergalactic Stock Exchange in Earth's orbit where the takeover is to take place in the Business Centre. All of PlanEx's stockholders are there, plus Mom, her three sons and Castle. Both companies have to agree to the takeover, and even though all of the Planet Express crew vote against it, it turns out that the shares Zoidberg sold to Castle gave him majority control. The takeover is approved, and MomCorp now wants to buy all the shares it doesn't own at the price of $107 per share, which makes every remaining stockholder a millionaire. Fry asks Castle if he will not stop the takeover, but he refuses because he's an 80's guy. Suddenly, every bone in Castle's body starts to snap and bend—it turns out that he was so busy being an 80's guy that he forgot to get the cure for his boneitis—and his body rapidly contorts itself through several bone-breaking poses before he dies. After Castle's death, Fry gains control of his shares and makes a speech about how what really counts is friendship, which is more important than money - and as he makes the speech the value of the shares gradually crashes down until it reaches $0.03 per share. The crew tries to stop him doing the right thing, but it is too late - the shares of Planet Express are, once again, worthless and Fry rejects the takeover, as they have nothing left to gain from it. The crew grudgingly goes back to work. 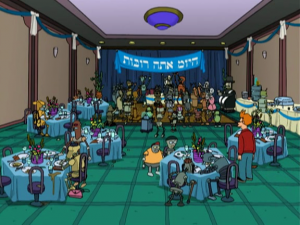 Scruffy: Now hold on there. Scruffy votes his forty thousand shares for the mysterious stranger.
Leela: Forty thousand? How come you have four times as much stock as the rest of us?
Scruffy: Scruffy believes in this company.
[Scruffy sniffles.]

Leela: Oh my god! I'm a millionaire! Suddenly I have an opinion on the capital gains tax!

That Guy: There are two kinds of people. Sheep and sharks. Anyone who is a sheep is fired. Who is a sheep?
Zoidberg: Errr, excuse me... which is the one people like to hug?
That Guy: Gutsy question, you're a shark.

Professor: I'll ruin you like I ruined this company!

That Guy: [Checking his new business suit.] That's what I call a hostile makeover!

Professor: This isn't a business. I've always thought of it more of a source of cheap labour, like a family.
Fry: You're right, Professor. We might not be a traditional family like the Murphy's next door or the lesbian coven across the street. But we are a family and That Guy understands that.
[He points to a photo of That Guy on the wall. A screen next to the photo comes on and That Guy is in the same pose as in the photo.]
That Guy: [on screen] Everyone's fired and we're out of business.
Amy: Oh, no!
Hermes: How?
That Guy: [on screen] I'm gonna sell Planet Express to Mom so she can gut the company and eliminate us as competitors.
Mom: [on screen] Don't let the door hit you on the way out, 'cause I don't want ass prints on my new door!

Leela: Zoidberg owned 51% of the company?
Hermes: The shares were worthless, and he kept asking for toilet paper!