"Raging Bender" is the twenty-first episode of Futurama, the eighth of the second production season and the twelfth of the second broadcast season. It aired on 27 February, 2000, on Fox. It guest-stars Rich Little as himself in a jar. After accidentally beating up the Masked Unit, Bender becomes the new favourite at Ultimate Robot Fighting League.

Act I: "Just walk around not wearing a helmet"

Hermes returns from his vacation and seems to have acquired a unique souvenir: a Brain Slug. As the rest of the crew wants to evade any possibility of assimilation, they all go to the movies. After some discussion, they decide to see All My Circuits: The Movie. Bender is angry about another robot with an exceptionally high head sitting in front of him and teases him continuously, until the stranger's patience is exhausted. He changes into a fighting monstrosity and chases Bender across the theatre, but when he has him cornered he slips on Bender's dropped popcorn (with extra motor oil) and is knocked out. It turns out the stranger was The Masked Unit, a member of the Ultimate Robot Fighting League. As it happens, the Commissioner of the URFL is present and enrols Bender on the spot to fight in the League.

Bender is very proud of being a member of the league, until he learns that Ultimate Robot Fighting is the most brutal form of competition in the galaxy. He wants to chicken out, but Leela stops him from doing it and tells a story about her youth in the orphanarium. When she was training Arcturan Kung Fu, she had a sexist trainer, Master Fnog, who deemed her inappropriate for championship because she was female, because women lacked the "Will of the Warrior". She wants Bender to seize his chance to be a champion and takes on the task of training him up for the big fight. At his first big night, Bender wins the fight after a bad start and against his expectations, and is told afterwards that all the fights are rigged and the most popular robot wins. As Bender is not only popular, but lowest-common-denominator, a great career starts. As Bender the Offender, he easily knocks out every fighter of the league, and as he knows the secret of success, he neglects his training, to the dismay of Leela. As his popularity drops, however, the league changes his persona to The Gender Bender and orders him to lose next week's title match. As his opponent is the robotic armoured tank Destructor, Bender reluctantly agrees, but he begs Leela to help him win this fight. At first, she refuses because Bender didn't want her help earlier, but as she learns that Destructor's trainer is none other than her tormentor Fnog, she is eager to train Bender and teach him to fight like a girl.

The great title match takes place at Madison Cube Garden, with commentaries by Rich Little and George Foreman. Fnog is making his little jokes, making Leela even more determined to beat him somehow. The fight does not go well, as Destructor is punching Bender at will and without remorse. Leela finally gives in and calls for Fnog to call his pupil off, then notices that Fnog has disappeared and a little antenna has taken his place. She locates Fnog under the ring, wearing a cybersuit that makes Destructor mimic his exact movements. She is enraged, especially as he teases her again, and attacks him. However, Fnog manages to take the offensive and is just about to deliver the final blow. Leela blocks that punch and manages to divert his fist to the ground, and accordingly, Destructor does the same. The fist goes through the floor of the ring and knocks Fnog out. As he falls over, so does Destructor, flattening Bender in the process - Bender has lost the fight. But Leela is still proud of him, as she got to beat up someone who hurt her feelings in high school. 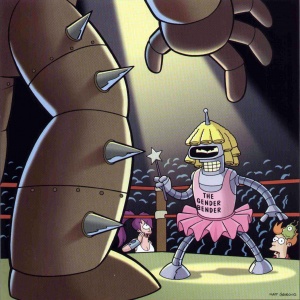 Professor Farnsworth: Good news, everyone! I've taught the toaster to feel love. And Hermes returns from his vacation today.
Hermes: [With Brain Slug on his head, monotonously.] Good morning people.
Amy: So how was the Spleef Nebula?
Hermes: The flight had a stopover at the Brain Slug Planet. Hermes liked it so much he decided to stay of his own free will.
Fry: Hermes has all the fun! [He notices Brain Slug.] Wait a second! He's got a Brain Slug on his head!
Leela: Shhh! You're gonna get us all assimilated!
Amy: Just act normal and switch to a garlic shampoo.
Hermes: On to new business. Today's mission is for you all to go to the Brain Slug Planet.
Zoidberg: What are we going to do there?
Hermes: Just walk around not wearing a helmet.

Leela: No, you've got to do it. I don't care how suicidal it is.
Fry: Hey, how come that when I want to do fun stuff that will kill me, you're against it?
Leela: This is more important than that marble eating contest, Fry.

Fry: Man, I thought Ultimate Robot Fighting was real, like pro-wrestling, but it turns out it's fixed, like boxing.

Destructor: I will destroy you! YAAARGH! And stop calling me!

Fnog: You were an excellent student. Too bad I was a lousy teacher!

The Foreigner: [Taunting the crowd.] I am not from here! I have my own customs! Look at my crazy passport!

Bender: It's one thing to win a fixed fight there's dignity in that. But to lose? And in this atrocity? I can't do it! Leela, you gotta train me to win.
Leela: No way! If you wouldn't take my help when you didn't need it, why should I give it to you now when you do need it?
Professor Farnsworth: What the hell are you talking about?
Leela: I don't know. But I'm not helping.