From The Infosphere, the Futurama Wiki
(Redirected from Kif)
Jump to navigation Jump to search

Kif Kroker is a nervous and selfconscious individual who suffers from lack of confidence. He is submissive towards Zapp Brannigan, even though Zapp frequently has him do humiliating things. Kif seems like the ideal candidate for General of the DOOP Army, however, he often gets the blame when Zapp makes a mistake and has the credit taken from him by Zapp when he succeeds. However, when under the influence of alcohol, he finds Zapp's statements to be extremely funny. 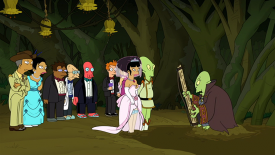 In 3001, Kif met the Martian engineering student Amy Wong on the Titanic, and exchanges a passionate kiss (1ACV10). In 3003 they developed an intimate relationship (3ACV01), and in 3008 Amy became Kif's fonfon ru (BwaBB). They briefly broke up (6ACV04), but got back together soon afterwards.

Kif Kroker appears in all episodes (not counting film episodes), due to being visible in the opening sequence. The list below consists of appearances outside of the theme only.