From The Infosphere, the Futurama Wiki
(Redirected from Hattie)
Jump to navigation Jump to search

Hattie McDoogal is an elderly woman with a lazy eye. Her memory is fairly poor. She tends to replace words that she doesn't remember with such nonsense words as "whatchacallit" and "kajigger", is the landlady of the building of Dr. Mbutu's apartment (1ACV03), owns one share of Planet Express (3ACV21) and loves her pet cats, one of which she keeps in her purse (3ACV21).

She was once the tiebreaker in a CEO election between Professor Farnsworth and Steve Castle (3ACV21). Although she was briefly with Professor Farnsworth on the Titanic (1ACV10), she seems to dislike him. She refers to him as a "cat-hater" and seemed pleased at the fact that he was receiving a mercy killing (6ACV18). She has two deceased husbands, both of whom were cremated (2ACV04), and suffered a bout of insomnia from 2974 to 3004 (4ACV04).

Hattie's last name was created in the comic book "Who's Dying to Be a Gazillionaire?", but was not considered canon until "Law and Oracle".

Hattie McDoogal: It's got a TV, you young whatchacallit... idiot.

Hattie McDoogal: You ate my change!

Hattie McDoogal: Dr. Mbutu collected this crap while he was exploring the whatchacallit... universe!

Hattie McDoogal: [After accidentally being turned into a man.] Now I gotta whatchacallit instead of a kajigger, you stupid whatchacallit! 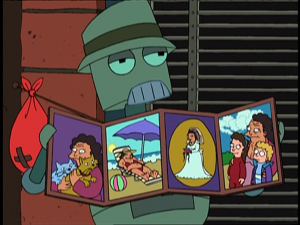