Slurm, the number-one soft drink of the future, is refreshingly addictive. It is produced in a factory on the planet Wormulon by a race known only as the Slurm Worms. Their corporate mascot is Slurms MacKenzie, "The Original Party Worm". However, the Planet Express crew discovered it actually comes from a giant worm's behind.

Fry is a huge Slurm fan, and rarely goes more than 12 minutes without one. 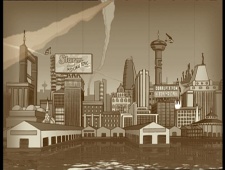 Slurm seen on a billboard in a photo from 2851.

Slurm has been around at least since the 2850s, when it was advertised as Slurm Medicinal Tonic. For many years Slurms MacKenzie was Slurm's spokesperson, until his tragic death (1ACV13). He has since been shown advertising Slurm on a TV screen in the V-GINY (6ACV02), but that could also have been an old video, or MacKenzie could have been replaced by a "new" MacKenzie or a clone, or possibly even a robotic MacKenzie.

Slurm has a secret recipe to avoid the disgusting truth - that it is the secretion of a giant Slurm Worm known as the Slurm Queen. The Slurm Queen can also produce Royal Slurm, which, if eaten, turns a larval worm into a queen. This secret was discovered by the Planet Express crew in 3000, and the disgusting revelation lead the Professor to attempt to get Slurm banned, but Fry was so addicted that he foiled the attempt (1ACV13).

Slurmee, one of the many types of the beverage.