Game of Drones is a Futurama match-three puzzle video game [2] developed by German-based video-game developer Wooga [1] and the second Futurama video game, after 2003's self-titled console game. It was announced on 8 July 2015. [3] The title was revealed on 23 November 2015. [1]

The app is a puzzle game that plays in the same way as Candy Crush Saga, where drones (coloured icons) on a tiled board must be matched via color by four or more to remove them from the screen. Special super drones can appear that give the player an advantage, such as the ability to destroy an entire row of drones, or to explode all of the drones in a specific radius. Each character also has a special ability that is charged up and can be used to clear the board of many drones. Later levels include challenges such as boxes that must be destroyed by removing drones next to them, and pizza boxes that must reach the bottom of the screen. Levels are completed when the player removes a certain number of specific drones, destroys all the boxes onscreen, succeeds in getting all of the pizza boxes to the bottom of the screen or a combination of the three.

Players are only given a certain number of moves per level. If they run out of moves, they must either give up and lose a life or use in-game currency to gain a few more moves and keep trying. A maximum of 5 lives are permitted at once, and it takes 30 minutes to regain a single life. A free life can be quickly gained by watching a 30-second-long ad.

Boosters are also eventually made available to the player, which must be bought using in-game currency. In-game currency can be purchased using real world money (microtransactions). An alternate way of gaining in-game currency is by spinning the Wheel of Robots (which requires the player to watch a 30-second-long ad), which can reward the player between 1 to 5 units of currency. Other bonuses include unlimited lives for either 5, 10 or 15 minutes. The wheel can only be spun once every 10 minutes. 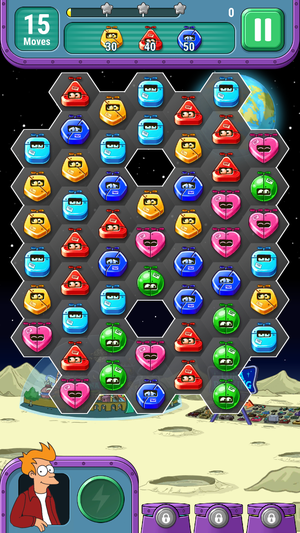 The game's story is told through a series of interactive comic book pages, which are unlocked by progressing further into the game. In "See Also" below there is a link to view the Comic Panels, although plot elements through in game dialogue flesh out the story.

In 3015 at the Planet Express headquarters, Professor Farnsworth reveals to the crew that he has invented delivery drones due to negative customer feedback. The professor then teaches them how to deliver the drones, which requires matching them up via colour (this is because they "tend to wander off unless they're in a group"), then sends them on a delivery to Luna Park. Meanwhile, Mom spots the drones and becomes suspicious, so she sends out a MomCorp spy drone to investigate.

After the crew defeats the spy drone, Mom decides to initiate "Operation Unfair Competition", and sends out an army of box-carrying drones that work under a new program known as "Momazon Primo", which comes with "free shipping that you pay for". Realising that this could put Planet Express out-of-business, the professor decides that they'll compete by including food-grade pizzas with their deliveries. Whilst on the moon, the crew stop at the hydroponic farm at the request of Bender, who quickly tries to come up with an excuse for why he wants to go there. Once at the farm, Bender purchases illegal moon ferrets from the hydroponic farmer.

After making drone deliveries across the moon, the crew must battle Zapp Brannigan. Upon defeat, Zapp boards the Planet Express ship (whilst Bender desperately tries to hide his moon ferrets) and requests that they deliver him to the DOOP headquarters, which has been taken over by Neutrals. The Neutral President claims that they came to power lawfully when the vote resulted in an exact tie. Zapp battles with the President, resulting in the HQ activating its self-destruct mechanism. The headquarters are destroyed, and Zapp flees the scene in an escape pod. Leela suggests the crew should lay low for a while, so Bender decides they should go to Mars Vegas.

Whilst exploring the casinos, the crew come across the Robot Mafia. The mafia demand a cut of any business the crew do there, threatening to harm them if they do not pay up. Bender ends up keeping one of the drones as a pet, naming it Rusty, and meets up with Joey Mousepad to sell him his moon ferrets. Since this qualifies as business within Mars Vegas, the mafia demand their cut of the profits, despite Bender selling the ferrets to one of the mafia's own members. Bender explains that he already spent the money on a sweater for Rusty and offers it to them, however, they tell him to get their money within five levels (levels being Martian hours), otherwise, he will be clamped. Failing to pay up, Bender then battles and defeats Clamps.

The Donbot considers their debt forgiven, but warns them to leave at once. Unbeknowst to the crew, Clamps removes the ship's brakes. Still on the run after accidentally destroying the DOOP headquarters, the professor buys the crew new identities: Fedgewick (Leela), Thrundle (Bender) and Crotchmonitor (Fry). Later, the ship approaches the Planet Express hangar back on Earth, but as a result of the sabotaged brakes, it crashes straight through the floor and into the New New York sewers. Leela notices that there are no mutants anywhere, when suddenly Leg Mutant thuds agains the windscreen of the ship. Leg Mutant tells them that Mom has forced all the mutants into sweatshop labor at the Momazon Primo warehouse. Enraged, Leela announces that she is going to save her parents (and maybe the other mutants, too).

After word of Mom's mutant sweatshops is leaked to the media, she pretends to have been unaware of the slavery, and vows to punish anyone responsible. However, she also argues that the sewer unemployment rate is now 0%. Behind the scenes, it is revealed that Mom is using brain slugs to keep the mutants under her control. The crew capture all of Mom's drones in a huge net and crash it directly into the Momazon Primo warehouse, freeing her parents and the rest of the mutants. Trying to figure out a way to get rid of all of the drones in the net, Fry suggests they dump them in Robot Hell. With the ship's brakes still damaged, the gang enter Robot Hell and crash directly into a soundproof seal which contains Calculon.

Meanwhile, the Robot Devil isn't pleased about the pile of MomCorp drones dumped everywhere. After calling the MomCorp helpline and attempting to cash them for a deposit, Mom tells him that the Planet Express gang are responsible for making the mess and that all of their drones have robot souls. Calculon suggests that the crew go to Malfunctioning Eddie's rocket repair (now located in Robot Hell) to get their brakes replaced. Upon arrival, the gang are greeted by Eddie and a fembot that looks strikingly similar to the Planet Express ship (and also identifies the ship as "Aunt Agnes"). Eddie explodes upon hearing the ship has no brakes (due to how expensive the repair job will be), and the fembot replaces them.

After several failed attempts to obtain the crew's drones, the Robot Devil gives up trying to negotiate and battles with Calculon. Upon the Devil's defeat, the crew throw Calculon out of the ship and return to Planet Express. Leela is disappointed that she can't cash her paycheck due to it being made out to her new identity, so Hermes suggests that he can expunge their death sentence records from the Central Bureaucracy (conveniently where they are due to make their next deliveries). At the Bureaucracy, the gang go to the Court of Criminal Innocence, where Roberto works as a Level 27 Bureaucrat (to help clear his criminal record). Hermes explains that he is trying to file a Form 929, but is missing some of the paperwork. Roberto tells him that without the completed form, he isn't getting past his "Form 929 Approval Knife". Hermes brandishes an even bigger knife, and the pair fight, resulting in Roberto's defeat.

Two hours after getting their original identities back, the crew are banished from Earth, due to Hermes having wiped everything from their records clean, including their Earth citizenship. They decide to return to Mars to visit Amy at Mars University where they can also acquire student visas. 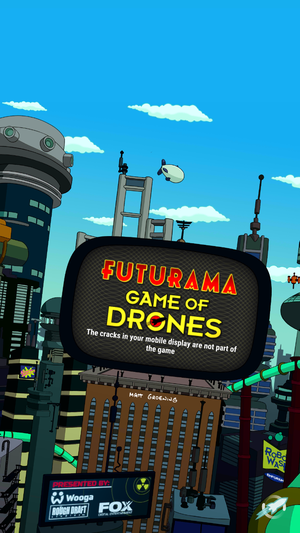 The game's levels are broken into different locations taken from the show. The following locations are used in this order:

Boosters that aid the player are eventually made available. There are 2 types of boosters, some that are activated before starting a level and some that can be activated during a level.

The player assumes the role of one of several characters from the show in each area of the game. Each character has his or her own special ability.

An update to the game allows players to collect virtual trading cards through completing levels (regardless of if the player wins or loses). Once a full set of cards has been completed, the player is rewarded with in-game goods, such as boosters, currency, unlimited lives for a short period of time, more cards, or a new Planet Express ship to use in the 3D map screen. Up to 5 cards can be earned per day through play; it is possible to get additional cards by spinning the Wheel of Robots after watching an ad. Alternatively, additional cards can be purchased using in-game currency (a regular pack is 100 bucks & a premium pack is 1000 bucks).

Another update to the game allows the player to unlock different Planet Express ships taken from across the show to equip and use in the 3D map screen. The ships only provide a cosmetic change. The following ships are currently available: