Osiris 4 is a desert planet orbiting a binary system. It has a culture similar to that of ancient Egypt, because the two races were apparently in brief contact when the Egyptians visited Osirians thousands of years ago. The upper classes and High Priest live lazily while numerous slaves work building numerous large monuments and other structures. The planet was briefly ruled by Bender following the death of Pharaoh Hamenthotep. Most who visit the planet never want to leave, though that is because they have no choice as they are enslaved the moment their ship touches down.

In 3017, Bender traveled back to Osiris 4 to force the slaves to rebuild the monument to himself. 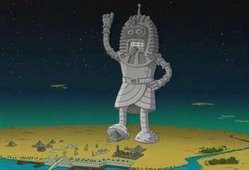 Bender's giant statue with his tomb under the right foot.