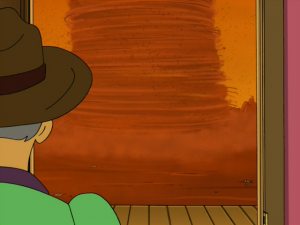 A dust storm that takes the shape of a cyclone.

Philip J. Fry, II was the first man on Mars (a feat which has never been equaled), and it was terraformed with traditional college foliage such as ivy, trees and hemp around the time of the founding of Mars University in 2636. Sir Reginald Wong bought Mars from the Native Martians (he traded them a diamond) sometime after that. The purchasing of Mars is celebrated every year as Mars Day. As of 3012, Mars is the third planet from the sun, after a massive solar flare ignited subsurface gas pockets that propelled the planet out of orbit (7ACV02).

Mars is frequently victimized by giant dust storms that occasionally take the shape of cyclones. It is unknown whether Native Martians are the sole cause of these storms, or if they occur naturally. Most of Mars appears to be a desert, although a large river and waterfall, as well as a lush jungle, are seen near the University, as depicted in "Mars University".