The Donbot is the head of the Robot Mafia, and works alongside Clamps and Joey Mousepad. He is a green, fat, male robot, perhaps originating from Earth or Sicily 8, who is usually seen wearing both a brown hat and a brown jacket. The Donbot is the husband of Fanny and the father of at least two daughters, one of which is Bella. 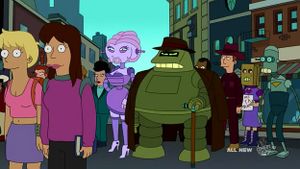