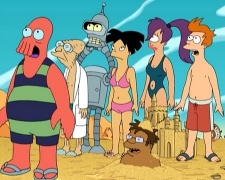 Futurama features a wide array of characters, both primary and minor. For a complete list of the characters of Futurama, check this list.