From The Infosphere, the Futurama Wiki
Jump to: navigation, search
Non-canon

This article is about a comic or a subject related to a comic. Its content has been known to be contradicting with an episode of Futurama and is therefore considered non-canon.

Fry has been reading a reprint of an old Simpsons comic during the crew's journey to the Geek-e Galaxy. Their mission is to take the biggest comic collection in the universe back to Earth to be sealed in liquid diamond forever. However, they are soon interrupted by a zap from the Brain Spawn's stupefaction field. Fry, remembering his previous encounter with the brains, vows to stop them from destroying the Earth. Lacking any books, the pair of brains are soon forced to send the trio's minds into a nearby comic, which they quickly escape. Having found a spoiler ray, Bender forces them to reveal they are planning to collect comics so no-one can read them again and will move on to other literature which will reduce the I.Q. of Earth so they can invade. After Fry informs the Brain Spawn that the rest of Planet Express' staff will avenge them, the brains retrieve the others. The brains then send everyone into an original printing of a Simpsons comic, but thanks to another unintentional suggestion by Fry, the brains don't enter the comic themselves. While they aren't stupid, the group suffers some memory loss. Nibbler is able to help with this, until he looses focus when Quimby falls on him, as a result everyone except Fry and Nibbler has amnesia and wanders off.

The Brain Spawn have sealed the comic in diamond, Nibbler senses this and informs Fry there's only false hope left and also tells him that the others will most likely gravitate towards the main characters. Fry runs off to find the Simpsons, while Nibbler tries to break the barrier with his mind. Bender stumbles across Moe's Tavern and poses as the new Duff mascot in order to get free beer and he soon gets in a fight with Homer Simpson, but after some heavy drinking, they make friends. Meanwhile, Fry arrives at Springfield Elementary; Scruffy has been hired as Willie's Janitorial Assistant. Fry poses as the substitute teacher for Bart Simpson’s class. After taking sunglasses from Roy, Leela finds Lisa being bullied at school and being mistaken for the new counsellor, beats up the bullies for her. Zoidberg and Hermes wander into the Nuclear power plant and Mr Burns mistakes Zoidberg for a mutant, so he offers the pair of "best friends" dinner so he isn’t sued. Fry tries to explain everything to Bart, unfortunately he doesn't believe Fry and has him locked in the school at the end of the day. Professor Farnsworth fails to notice a traffic light and, after speaking with a crazy old man, decides to make it more efficient with a holographic image of a woman. The unfortunate result being several crashes, Nibbler sees him, but Marge finds Nibbler before he can do anything. To save time and energy, he uses simple hypnotism to convince her that he is a baby, but she gives him a bottle of milk - and lactose causes Nibblonians to lose their intelligence. Wiggum arrives at the crash site and sends Farnsworth to the Springfield Retirement Castle... 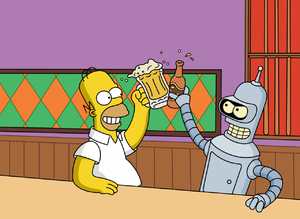 Promo pic for this comic.

Leela: You'll wake up Nibbler! He looks so cute sleeping.
Bender: Yeah, not like Fry, drooling all that blood and all.

Professor: Let ME say it this time.
Hermes: Go ahead.
Professor: Fry, you're an idiot.

Narrator: Is all lost for the Planet Express crew? Are they finally, truly, totally boned?
Brain Spawn #1: Yes, they are!
Brain Spawn #2: Who are you talking to?