Not to be confused with Anthology of Interest II.

Farnsworth jabs Bender between the eyes with the fing-longer and asks him to help test the new and improved What-If Machine. He asks "What if I ruled the world?" but nothing happens so he asks "What if I hit it with a hammer?" The machine starts working and Bender is inaugurated as President of Earth, his generosity and excessive celebration makes him very popular, until the value of the dollar drops. He declares war in hopes of regaining popularity, one of the planets hit in the crossfire is Omicron Persei 8 and with death imminent, Bender turns himself off and the scenario ends. Zoidberg wants to ask a question, but Hermes asks one first: "What if the world was perfectly organised?" the machine shows Hermes seeing the building and nearby birds are all perfectly organised. In order to experience it to its fullest he sits at the conference table with his feet up. The scenario ends.

After Fry complains that Hermes' story was boring Hermes heads to the conference room. Zoidberg wants to ask a question, but Farnsworth misunderstands him. Fry asks "What if Leela fell in love with me?" During a group shower session, Leela suddenly finds herself attracted to Fry, so when he asks her out for the 4,829th time, she accepts. The date goes well, but as the are about to kiss, the Omicronians burst out of her building searching for president Bender. After the the scenario ends, Farnsworth offers Amy a turn. She can't think of anything until Zoidberg's pleading for a turn gives her the question "What if we were all poor sticking lobsters for just a minute?" The Decapodian versions of the crew decide to root through the dumpster, leaving Hermes at the conference table. Bender is already in the dumpster, and tells them he's been invited for a free dinner at Elzar's, however he is actually selling them to Elzar as food. There's time for one more question and Leela cuts Zoidberg off with "What if I had a normal childhood?" Teen Leela arrives home to an above ground house and has dinner with her parents, who constantly call things normal. Smitty and URL ring the doorbell, they have to arrest the mutants due to laws passed by president Bender. Leela complains that he is not supposed to even be built yet and when Fry appears to finish their kiss, she notes that she doesn't love him in her scenario, but they aren't in his scenario either, as evidenced by the Decapodian Amy. Hermes meanwhile is at the conference table. Back at the pentagon, the other question askers are met by Lrrr and Ndnd. Lrrr blasts a hole through Bender's chest and complains that Farnsworth couldn't remember how to work the what if machine in order to see his question answered. Bender helps out by hitting it with a hammer. As it turns out, they'd all been experiencing the "What if I hit it with a hammer?" scenario. As the professor goes to put the machine away everyone tells him to let Zoidberg have a go, but it turns out Farnsworth hadn't fixed the toxic nerve gas problem, and they all fall unconscious into a pile. 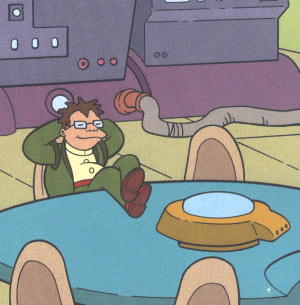 Hermes makes the most of it in this running gag

Zapp: A war to end all wars, you say?
Bender: No, just one that will make me popular again.
Zapp: Without a defined enemy, my suggestion is to shoot randomly in all directions.

Lrrr: People of Earth! I am Lrrr of the planet Omicron Persei 8!
Ndnd: You don't need to shout. They're right next to you.