"Full Metal Racket" is the thirty-seventh comic issue, which was released 28 May, 2008 in the US.

After a pair of failed deliveries, the crew pick up some hitch hikers. They turn out to be from Aliens for the Ethical Treatment of Mammals and are there to liberate Fry and Leela from Planet Express' working conditions. The mammalian crew members soon find themselves stranded on a farm planet, where transforming robotic farm equipment begins attacking them as a mammal eatng the crops is considered a pest. On his return to the office Bender is suspended for having lost two-thirds of the crew and takes to the streets. Meanwhile, Fry and Leela escape the transfarmers by jumping into a hole in the ground. At the bottom, they meet Pamela, who was also "freed" by AETM, who clearly didn't know the situation on the planet. The leader of the group soon returns, it's Zapp, and true to form he's gotten everyone else who'd been brought there killed.

After tricking a space scout and taking his bucket of fund raising money, Bender meets up with Tinny Tim, who tells him all about the scouts and their compasses. This new piece of knowledge inspires Bender to find a way to reverse the Earth's magnetic field in order to sell compasses and become rich. He borrows some supplies from the Professor and his machine is soon ready to use. It explodes straight away and Bender is left as a reverse magnet, repelling even booze and floozies. Leela and Pamela have come up with an escape plan, but Fry goes with Zapp to try his idea due to the promise of pie. They dress up in cardboard boxes to look like a giant robot and ask to borrow a spaceship, but soon anger the transfarmer who then tries to kill them. Bender, depressed, finds a quarter but it is repelled toward the scout, he then attempts to use a suicide booth but it too is repelled. Back on the other planet, Pamela and Leela have built a rocket out of indigenous plants. Three of them leave on the rocket, with a distracted Zapp to be picked up later by Kif. On Earth, Bender has acquired a wooden catapult to kill himself with. The escapees arrive and Bender decides to fly to the sun in their rocket instead, but it explodes on take-off, removing his magnetic effects.

Hermes: Leela! It's so good to see you back alive! I'll get the paperwork started to dock you for your missed days! 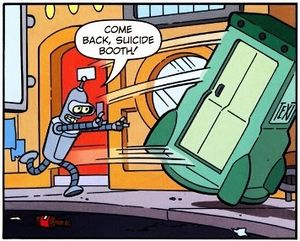