From The Infosphere, the Futurama Wiki
(Redirected from Mom's Friendly Delivery Company)
Jump to navigation Jump to search

MomCorp is a worldwide company, mostly owned by Mom. The most well known cornerstore of MomCorp, Mom's Friendly Robot Company is the manufacturer of most of the world's robots. They also produce the preferred brand of robot oil, Mom's Old-Fashioned Robot Oil. Mom presents an image to the public of a sweet, kind, frail old woman, but this is a façade maintained for PR. Behind the scenes she rules the company with an iron fist, and will lie, manipulate, and even outright steal in order to make the company succeed. The company is among the leading universal industrial trusts and seems to have the market really cornered.

The history of MomCorp is mostly unknown. In 2801, a company named "Friendly Robot Company" (which created the Robot Santa Claus) already existed, [2ACV04] probably later taken over by MomCorp. Professor Farnsworth worked for MomCorp as early as 2881. [2ACV10] [2ACV14] 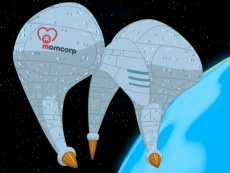