From The Infosphere, the Futurama Wiki
(Redirected from Robot Santa)
Jump to navigation Jump to search

Robot Santa Claus was built in 2801 by Mom's Friendly Robot Company. His designers intended him to deliver gifts to all the good people of Earth on Xmas Eve. However, due to a glitch in his judgment circuits, his standards are impossibly high, and he invariably judges everyone to be naughty (one exception is Zoidberg, to whom he gave a pogo stick) - and then he tries to kill them.

Santa Claus spends most of the year living in his Death Fortress on Neptune. His fortress is surrounded by a small town inhabited by his aides, shrimpy Neptunians. These workers growth is stunted by the lack of food, so they reach an adult height equivalent to the height of a human knee (as opposed to a healthy Neptunian, such as Elzar, who is comparable in height to a human) and they are all unemployed since the toy factory closed down because of Robot Santa's malfunction.

He took part in the Battle for Earth, 3007 (alongside his holiday counterparts Kwanzaa-bot and Chanukah Zombie forming the Holiday Trinity) as the Scammer Aliens scammed him, making him too miserable for murder or mayhem. 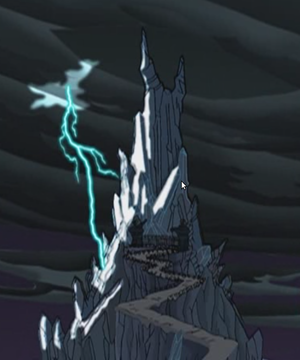 Robot Santa: Ho, ho, ho! It's time to get jolly on your naughty asses!

Robot Santa: I'll be back. Back when you least expect it: Next Xmas! Ho, ho, ho!

Robot Santa: You dare bribe Santa?! I'm going to shove coal so far up your stocking you'll be coughing up diamonds!

Robot Santa: Fry and Leela, you've both been very naughty! I checked my list.
Fry: Well... Check it twice!
Robot Santa: I perform over fifty mega-checks per second!

Robot Santa: You have all been very naughty, very naughty indeed! Except you, Dr. Zoidberg, this is for you.
Zoidberg: A pogo stick!

Robot Santa: Your mistletoe is no match for my TOW Missile!

Neptunian: We brought your mail.
Santa: Don't you ever knock? Who knows what naughty things I could be watching? I get New Orleans on this thing, you know!
Neptunian: Don't kill us!

Robot Santa: I'm going to tear off your skin like wrapping paper and deck the halls with your guts!

Robot Santa: Ho... ho... ho. Oh, my heart's not in it. I'm too depressed for murder and mayhem.
Amy: Aw, try some antidepressants. They're gummy.
Fry: What happened, Santa?
Robot Santa: The scammers cheated me out of my naughty list to use for telemarketing. Can you imagine the harm they could do with that information? I wanted to do that harm!