Welcome to The Infosphere: The Futurama Wiki, the Futurama memory bank that anyone can edit.

We currently have 3,555 articles about Futurama episodes, characters, and merchandise and we're growing every day.

Shortcut for this article:
I:AL 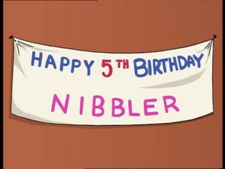 No anniversaries available. If you know of one, please add it.

The air dates and release dates

13 January The Bender You Say U.K.

1 February How to Secede Without Really Trying U.S.

5 May part 2 of Six Characters in Search of a Story U.K.

25 May The Trouble With Trilogies U.S.

28 May The Bender You Say U.S., Full Metal Racket U.S., Welcome to my Nightmall U.S.

23 July Six Characters in Search of a Story U.S., Rumble in the Jungle U.S.

22 September part A of The Time Bender Trilogy: Part 1 U.K.

23 September The Cure for the Common Clod U.K.

9 October Who's Dying to Be a Gazillionaire? U.K., New Year's Rockin' Evil U.K.

20 October part B of The Time Bender Trilogy: Part 1 U.K.

15 December part B of The Time Bender Trilogy: Part 2 U.K.