This page lists articles that were featured on the Main Page during 2006. If you have ideas for pages that should be featured, please add them on the nominations page.

Space Pilot 3000 was the first episode of Futurama, and introduced us to all our favourite characters. The show opens with Philip J. Fry being called to deliver a pizza to I. C. Wiener, and accidentally falling into a cryogenic freezer, only to be awakened one thousand years in the future, in the city of New New York.

This episode showcases the forethought and planning by the creators of the show, as many things in this episode are referenced outright in future episodes, or explained more subtly. The most famous example is the shadow of Nibbler being shown under the desk just before Fry falls into the freezer. Many one- or two-line characters show up in future episodes, like Mr. Panucci and Fry's Girlfriend, Michelle.

Bender Bending Rodriguez, bending unit 22, was born in Tijuana, Mexico. Bender abandoned his job after learning that he was providing parts for suicide booths, and met Philip J. Fry, another person trying to escape employment.

Turanga Leela is one of the main characters on Futurama. She starts off as a Fate Assignment Officer for Applied Cryogenics, but deserts her job after meeting a defrostee named Fry. She then joins Fry and a robot named Bender at Planet Express, a company owned by Fry's distant relative, Professor Farnsworth.

Throughout the series, Leela's past demonstrates the planning that went into the early stages of development of Futurama. At first, we are to believe that she is an alien, the last of her kind and completely alone. Later, however, we learn that she is actually a sewer mutant. Close scrutiny of an earlier episode shows that her parents are visible as background characters the first time we meet the mutants.

Mom is the owner and CEO of Mom's Friendly Robot Company. Decades ago she had a failed relationship with Professor Farnsworth, which may have been caused her current bitterness. Her sons Walt, Larry and Ignar work as her assistants.

The Decapodians are a race of sentient, lobster-like creatures from Decapod 10. Because Dr. Zoidberg is a main character, Decapodians have become one of the best known species in Futurama. Decapodians are very strong, and their claws are sharp enough to cut steel bars and similarly hard things.

Philip J. Fry is one of the key employees at Planet Express. As official Delivery Boy, ship crew member and general oddjob man, he is member of the core delivery crew that does most of Planet Express' actual work. On new-years eve of 1999, after his girlfriend Michelle broke up with him, he attempted to deliver a pizza to I. C. Wiener at Applied Cryogenics. While there, he was frozen for a thousand years, arriving abrubtly into his new life in the 31st century, to which he has adjusted well. During a trip back in time to the year 1947, he became his own grandfather, this caused a unique genetic anomaly that makes him the most important person in the universe.

The Why of Fry is a major episode of Futurama. After four and a half seasons, the reason for Nibbler's shadow in Space Pilot 3000 is revealed. This scene at Applied Cryogenics was aired in many episodes and even changed to have Fry's shadow there before this episode can to light. Thanks to "the nasty in the pasty" Fry is immune to the Brain Spawn's attack and was able to save the universe, but only after Nibbler promised to help him in his efforts to romance Leela.

The Futurama video game, released in late 2003, is currently the only official game based on Futurama. The game starred the cast of the series and the plot was developed by a writer for the series, this meant that the game contained what some describe as a "lost episode". The player, as Fry, Bender, Leela and Zoidberg, is tasked with attempting to save the universe from Mom, who has become the majority shareholder of the Earth. 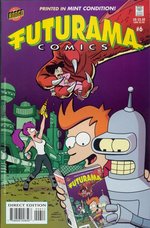 Xmas Time Is Fear is the sixth (or eighth in the UK) of the Futurama Comics, which continued to be produced during Futurama's hiatus. This was also the first Xmas comic. Readers saw a team up between three of their favourite villains; the Robot Devil, Santa and Nixon. While they also learned a little more about the story of Xmas, Zombie Jesus' origins.