This page lists articles that were featured on the Main Page during 2008. If you have ideas for pages that should be featured, please add them on the nominations page.

The title captions in Futurama's opening sequence, like The Simpsons' chalkboard, change with every episode and are always unique. As well as those that have been used for the episodes and films, the writers have released many others in the DVD special features.

25-Star General Major Webelo Zapp Brannigan is one of the most decorated commanders amongst the DOOP Army, he is known for his brilliant tactical mind that has lead him to victory against such enemies as the Retiree People of the Assisted Living Nebula and the peaceful Ball-People of planet Spheron 1. Brannigan's love of velour is outstretched only by his love for Leela, who after they first "crossed paths" has had to reject his advances each time they meet, no matter how much Champpaggin he offers. 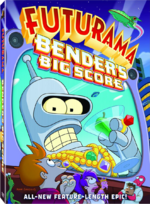 After a break of four years without any new episodes of Futurama, four films are being released. The first, Bender's Big Score, has been released in the USA and Australia and is due out early next month in Europe. In the film; the secrets of time travel are found on Fry's buttock and a group of scammer aliens takes control of Bender. Meanwhile, Leela finds true love and Hermes looses his body.

Mars University is a university located on Mars, which featured prominently in a similarly named episode. The university was established in 2636 and resembles the universities of the 21st century with lecture halls, fraternities, the universe's most comprehensive literature collection and featuring traditional foliage such as ivy, trees and hemp. The university has skilled educators such as Farnsworth and Wernstrom on staff and offers subjects such as 20th Century History.

Blobs are a species of jellyfish-like aliens of unknown origin who have settled on Earth and other nearby planets. Members of the species, the most notable of which is H. G. Blob, tend to be quick to anger and may solve their problems by eating them. Although eating annoying humans may just be a habit of H. G. and his family. The Blob digestive system is not a unidirectional system and anything eaten remains visible, and potentially alive, while being digested.

Kif Gets Knocked Up a Notch continues the relationship between Kif and Amy that first blossomed in A Flight to Remember on board the Titanic. Here, during an unscheduled detour from a delivery, Amy meets up with Kif and causes him to enter a receptive state, leading to his pregnancy. Amy has trouble adjusting to her role as Smizmar to her unborn children and even reconsiders the entire relationship.

War Is the H-Word follows Fry and Bender into war on Spheron 1 as they join the army for the most noble of causes; cheaper gum. Unfortunately, the Spheroids prove to have plenty of chutzpah, leading to a closely matched battle for the Earthicans. Meanwhile, General Brannigan finds himself oddly attracted to Private Lee Lemon, another new recruit.

In Future Stock, the stockholders of Planet Express learn the true value of their shares is nothing and vote in a mysterious stranger as the new CEO, in hopes that he can turn the company around. When that guy takes control, the company's environment changes drastically, taking on the sleek, dazzling veneer of the 1980's. Under new management, the company appears to be a threat to one of Mom's business investments.

The Democratic Order of Planets (DOOP) is an interplanetary governing body headed by DOOP President Glab, similar to the UN in the 21st century. They hold negotiations, and have wars like most governing bodies, members can still act alone however. Many regulations are imposed on staff and citizens, such as Brannigan's Law and not being allowed to blow up DOOP property. The DOOP's current headquarters are located in Weehauken, New Jersey, Earth.

The Lovenasium is what Zapp Brannigan calls his Captain's Quarters on board the Nimbus. The room is decorated with Zapp's favourite things, pictures and sculptures of himself and plenty of velour, along with a floating bed, plants and a bar. During her visit here, Leela committed a regrettable act that seems to come up in conversation every time she sees Zapp.

Leela's Homeworld is an episode all about Bender's new waste management business. Additionally, there's a plot involving Leela finding her home planet. After being raised as an orphan and having long thought she was all alone, as the only one of her species on the planet, the truth came as a shock to her. Observant fans may have noticed a clue a long time before hand.

Futurama has many rarely seen characters, among which are Dave Spiegel and his owner Fluffers. Dave is a pet that looks like, and might be, a human, whereas Fluffers looks remarkably like an anthropomorphic cat. Fluffers once entered Dave in a pet show, while they came in third; the 2nd place entrants were technically ineligible and the winner may have had an unfair advantage. 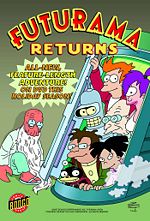 Towards the end of our time without new Futurama episodes, we finally learned that the wait would soon be over. At Comic-Con 2007, members of the cast and crew appeared, bringing with them a special edition comic; Futurama Returns. While the story therein was not canon, its message, that four new DVD films were coming, was true and so far three have since been released across the northern hemisphere.

As well as being the name of a certain Futurama Wiki, The Infosphere is also the name of a massive biological memory bank created by the Brain Spawn to catalogue all the information in the universe. Twice the size of three ordinary memory banks; the Infosphere was part of an almost successful plan to collect all information, then prevent more information from being created by destroying the universe. The ancient and powerful Nibblonians had set in place a plan, knowing that success would require something "special", or a lack of it.

Among the members of the Robot Mafia, none are more prone to angrily clamping things than Clamps. As one third of the Mafia's numbers, he does about half the gooning, and all the clamping, the group needs. His clamps are a rarely seen style of robot hand, that are apparently replaceable (Donbot offered to give Blotto a pair), and require regular maintainance. However this may be due to overuse.