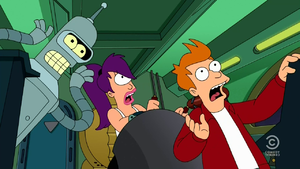 A screenshot from "Assie Come Home", which serves as the thumbnail for the Vulture preview clip.

The Vulture preview clip (labelled "Futurama: The Planet Express Crew Is Back!") is a preview clip for broadcast season 10. It was released by Comedy Central, and was reported by Vulture.com, [1] one of the websites of New York Magazine. It contains footage from all the episodes of the season but "Forty Percent Leadbelly".

Before being released, the clip was screened at Cobb's Comedy Club, in San Francisco. [2]

Leela: It's time we solved this problem the old-fashioned way. By shooting it!
Bender: Wait wait wait wait. You can't give everybody guns. What if one of us is the creature?
It could be any of us. Fry... Leela... Amy... Zoidberg... Zoidberg.
Zoidberg #1: One of us must be the bad creature.
Zoidberg #2: Is it me, maybe?
Awww.