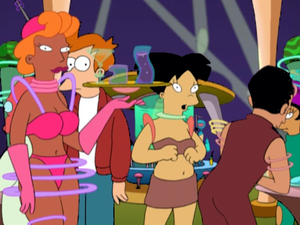 Fry and Amy in The Hip Joint, a very fashionable place (1ACV04).

Fashion in the 31st century is very different to what it is today. Formal uniform is much the same, but casual clothing is a lot different. When it comes to Human fashion, women can be seen in oddly shaped, very colorful clothing with very high necks and sometimes big hair, while men can be seen wearing tight clothing with the shirt and the trousers joined together and with same color. According to Amy, rings are considered incredibly unfashionable (1ACV04).

Technically, fashion appears in every episode, comic, and film. This list only deals with media in which relevant information is revealed, or unusual clothing is shown.