From The Infosphere, the Futurama Wiki
(Redirected from Sewer Mutants)
Jump to navigation Jump to search

The sewer mutants are a species of mutated individuals living in the New New York sewers. Appearances aside, they are mostly decent people, if a little odd. It is unknown how long they have dwelled below the city of New New York, but it has been long enough for them to build a city and a semblance of civilization with objects from the surface which were flushed away. As of 3010, in New New York, the sewer mutants are considered to be regular NNY citizens with equal rights to the surface of the city.

Members of the species seem to be impervious to many toxins and radiation such as the Lake Mutagenic, or at least they can't be remutated. There are probably a few hundred of them, each with his/her very own unique mutation. Extra or missing appendages or organs mostly work. It is possible that they are able to live a very long time as Devo and Andy Goldman were born in the 20th century.

According to a deleted scene, [6ACV12] the mutants were originally humans working in the sewers of New York City in the early 21st century. In the First Destruction of New York City of 2308, however, all exits from the sewer were blocked, and the workers couldn't leave for hundreds of years. During this time, the radioactive waste in the sewers had them mutate into the sewer mutants.

The sewers mutants were hidden from Humans by the government until 3010, when Mayor Poopenmeyer pronounced them free to walk on the surface. Prior to this declaration, the only condition for a mutant to do so was to obtain a one-day-surface permit from Citihall, but as there was nearly no contact between Humans and mutants, it was nearly impossible for them to leave the sewers. Leela and Fry led the Devolution Revolution along with an enormous army of sewer mutants to the surface and convinced Mrs. Astor, a very wealthy and powerful old lady, who then talked the Mayor into recognising the mutants' rights. 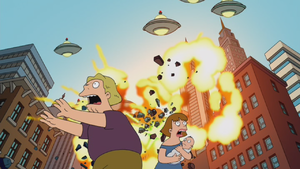 The First Destruction of New York City, which forced the workers to stay in the sewers.

This deals with appearances of sewer mutants that are not Leela, as it would then have been every episode, comic and film.