From The Infosphere, the Futurama Wiki
(Redirected from Tube System)
Jump to navigation Jump to search

The Tube Transport System (abbreviated TTS) is a form of mass transit in New New York City, replacing Old New York City's underground subway. The system consists of several transparent tubes, forking and merging without more apparent mechanism. Despite their apparent inability to perform, they are capable of transporting passengers to where they wish to go.

A passenger announces where he or she wishes to go, and the tube will activate and route them to their desired destination. Passengers enter head first, but manage to exit on their feet. However, it is common for tourists not to figure out the tube, so they occasionally land on something other than their feet. There is also a similar tube transportation system in a city on the planet Tova 9. [2ACV06] The TTS is apparently free of charge.

The TTS seems to be based on old pneumatic tubes, originally used to transport documents throughout offices (in fact, this can still be seen at the Central Bureaucracy).

A number of characters which are not formally introduced until later in the series can be seen in the tubes in the opening sequence of "Space Pilot 3000" — the first episode —, in particular Amy, Zoidberg, Zapp Brannigan, Kif, and Hermes.

Just like in the 20th century, rush hour traffic is still a problem, resulting in Citihall having to open a new line of tubes to reduce the traffic. [2ACV08] 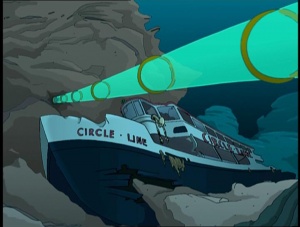 The TTS appears in every single opening sequence except for that of Into the Wild Green Yonder.