Dean Vernon is the Dean of the Mars University, and he loves the "peace and quiet and the respect [he] receives" the most. As a result, he hates Robot House (often hollering "Robot House!" after they'd committed some sort of misdeed). Accordingly, he put them on dodecatuple secret probation. Unfortunately for him, after Robot House won the Big Fraternity Raft Regatta, he was not only forced to take them off said probation, but had to serve as a grand marshall in a parade honoring them. 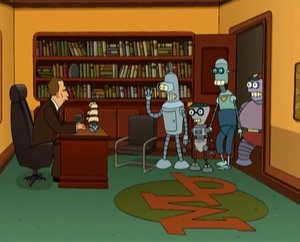