The Scary Door is a science-fiction horror television program in the 31st century. It is a spoof of the classic science-fiction TV series The Twilight Zone, and references several other TV shows and films, including the ending of War of the Worlds. Seven episodes of The Scary Door have so far been seen in Futurama media.

References to The Twilight Zone 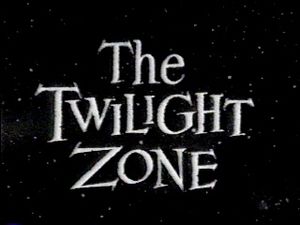 The title card to the 1960's series The Twilight Zone.

While referencing multiple shows and films, the main reference to The Scary Door is the classic TV series The Twilight Zone, famous for its dramatic stories with big twists by the end, often revealing that everything was entirely the other way around of what one would have expected, or introducing extreme irony; for example in Time Enough At Last, a man who loves reading enjoys the fact that he is the sole survivor of human race as he finally gets time to read - but then he breaks his glasses.

Most obviously, the opening sequence to the two are very similar: the camera drifts through space, with several strange objects flying around, with a host (originally Rod Serling) introducing the viewer to the strange area of The Twilight Zone (or in Futurama's version, one enters The Scary Door).

While some episodes clearly are references to specific episodes of The Twilight Zone (for example Last Man on Earth, which has almost the exact story as Time Enough At Last but takes it a bit further in irony), others are less specific. The Gambler has multiple references to episodes of The Twilight Zone, as well as a lot of original scenes. Others, such as The Most Evil Creature of Them All, are not specific references to episodes but rather mockery of the show overall, which sometimes is extremely overdramatic and always have a twist. The soundtrack is also very similar, including the dramatic twist music in every episode.

The Last Man on Earth 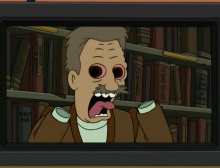 Announcer: You are entering the vicinity of an area adjacent to a location. The kind of place where there might be a monster, or some kind of weird mirror. These are just examples; it could also be something much better. Prepare to enter: The Scary Door.

[Scene: In a desolated world, a man with glasses walks through a library that was somehow spared from destruction.]

Announcer: As per your request, please find enclosed the last man on Earth.

Man: Finally, solitude. I can read books for all eternity!

[He drops his glasses and they break]

Man: It's not fair... [panicked] it's not fair! [calmer] Wait, my eyes aren't that bad; I can still read the large-print books.

[As he reaches for a book, his eyes fall out]

[His hands fall off. He screams, and then his tongue falls out. Then his head falls off.] 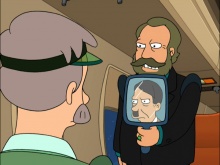 Announcer: You're entering a realm which is unusual. Maybe it's magic, or contains some kind of monster... The second one. Prepare to enter the Scary Door.

Announcer: Please send the man 'round back and pick up Clyde Smith. A professional gambler who's about to have an unfortunate accident.

[While crossing the street, Clyde is hit by a car.]
[Clyde wakes up in front of a slot machine. He pulls the lever and it comes up with three Bars.]

Clyde: [laughs] A casino where I'm winning? That car must've killed me; I must be in heaven!

[He pulls the lever again, three Bars come up again.]

Clyde: A casino where I always win? That's boring. I must really be... [dramatic] In hell!

Sebastian Cabot: No, Mr. Smith, you're not in heaven or hell. You're on an airplane!

[Man opens curtain, revealing airplane windows. Clyde looks out the window and sees a gremlin on the wing, tearing out the wiring.]

Sebastian Cabot: Why should I believe you? You're Hitler!

[Man holds up a mirror, revealing that Clyde's reflection is that of Adolf Hitler.]

[Clyde is transformed into Hitler. He turns to the person next to him.]

[Eva Braun pulls off her face to reveal that she's actually a giant fly. Clyde screams.]

The Most Evil Creature of them All 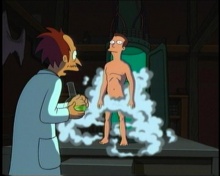 Episode 3, "The Most Evil Creature of them All".

Announcer: You're on a scenic route through a state recreational area known as the human mind. You ask a passer-by for directions, only to find he has no face or something. Suddenly up ahead, a door in the road. You swerve, narrowly avoiding The Scary Door.

[Scene: A scientist is in a Frankensteinesque laboratory mixing chemicals in a beaker.]

Scientist: I have combined the DNA of the world's most evil animals to make the most evil creature of them all.

[A pod reminiscent of the ones from the movie "The Fly" opens with a cloud of steam. It clears, revealing a naked human male.]

Naked Man: It turns out it's man. 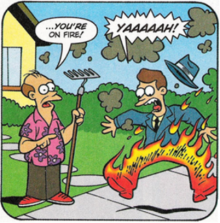 Announcer: Imagine, if you will, a three by seven inch wooden frame -- a frame that's a gateway to a world of imagination. Wipe your mind on the welcome mat. You're about to enter The Scary Door.

Announcer: Meet Brad Thompson, a man on his way home from a boring day at the office.

Brad: Man, I wish something exciting would happen... anything at all.

[A fire truck drives behind him.]

Brad: What's this? A fire truck is trying to pass me? To get to my neighborhood? I'll bet my neighbours house is on fire. I'd better speed up if I want to watch that.

[He gets to his neighbour's house]

Brad: Wait a minute. My neighbour's house isn't on fire. But then, what's with all the smoke?

[Brad is shown on fire]

[Brad's skeleton is on the floor]

Fireman: We tried to warn him that he was spontaneously combusting, but he drove away from us.

That Humblest of God's Creatures

Episode 5, "That Humblest of God's Creatures".

Announcer: Imagine, if you will, an announcer you can barely understand. He refers to a [mutters], but you're not quite sure what he said. He seems to be eating something, or perhaps he's a little drunk. It's remotely possible that he just said something about the Scary Door.

[Scene: A farm. Suddenly, it is attacked by UFOs shooting at everything in sight. Military forces are there, firing at the UFOs.]

Private: It's all over! Our guns and bombs are useless against the aliens.

[The UFOs starts to crash.]

Announcer: In the end, it was not guns or bombs that defeated the aliens, but that humblest of all God's creatures, the Tyrannosaurus Rex.

[A Tyrannosaurus Rex is seen crashing a UFO and eating the alien inside.]

The Aliens Are Among Us

Episode 6, "The Aliens Are Among Us".

Announcer: You're taking a vacation from normality. The setting: a weird motel where the bed is stained with mystery. And there's also some mystery floating in the pool. Your key card may not open the exercise room because someone smeared mystery on the lock. But it will open the Scary Door.

[Scene: Outside Capitol Hill where a press conference is taking place.]

Announcer: Submitted for your Emmy consideration: a popular Senator with unpopular ideas.

Senator: There's no such thing as space aliens!

Man: Oh? How can you be so sure them aliens aren't already among us?

Senator: I'll tell you how! [takes off the man's face revealing an alien lifeform] Because you ARE ONE!!!

Be Careful What You Wish For

Episode 7, "Be Careful What You Wish For".

The Scary Door narrator: Enclosed is a .pdf attachment, a picture of yourself in a boat on a river. It's a river that flows in two directions. Make that three. It's a magic river. That's how. It is flowing down the eerie canal to... The Scary Door. That's eerie with two Es. [C.U.: On TV, a scientist's laboratory. The scientist finishes welding a Robot.] Consider, if you have the energy, Dr. Daniel Zenus, an inventor with a terminal case of the lazies.

Dr. Daniel Zenus: This Robot will do everything for me! Robot, activate yourself and do my research.

[The Robot flips its own on switch and powers up. It begins tinkering with test tubes as the scientist leans back in a chair with a pillow.]

[The scientist kicks back in an armchair as the Robot, wearing a black tie, offers his arm to the scientist's wife. She takes it and they exit. We see a clock. The hands spin. Years later, the scientist, now older, is still kicking back as an official enters.]

Official: Dr. Zenus, for a lifetime of scientific achievement, we present this award to... Your Robot!

[The official gives the Robot the trophy. A boy enters.]

[The boy turns away from the scientist and hugs the Robot.]

Dr. Daniel Zenus: If only I'd programmed the Robot to be more careful what I wished for! Robot, experience this tragic irony for me!

[The Robot falls to his knees.]

[The scientist pops open a beer and takes a sip.]

The comic "Let's Twist Again" reveals that the ideas for The Scary Door come from an alternate universe where everything is ironic and there is only one writer for the show.