Chris Zaxxar Travers is a senator from Hawaii who was a candidate for the Presidency of Earth in the 3012 election,[7ACV03] after traveling back in time. Winning the election, he caused a time paradox that prevented him from coming to the year 3012 to begin with (even though he used a paradox-free time travel code). 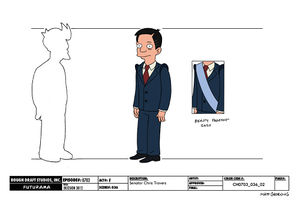