From The Infosphere, the Futurama Wiki
(Redirected from Bending unit)
Jump to navigation Jump to search

Bending units are robots built by Mom's Friendly Robot Company for the main purpose of bending metal for constructive purposes. Like many devices of the 20th century, however, these robots have many capabilities aside from their main function, and other robots, such as Robo-Rooter, are capable of bending while having other primary functions.

Purpose built benders are known to come in many varieties; model #22 for instance has at least two finish colour options: gold and fog hat grey. These units are assembled by robotic arms. While at least 994 models of bending unit exist, the only unit with a confirmed model number is the aptly named model #22 unit Bender Bending Rodríguez, who, like units of most of the other first 994 models, has been recalled. These robots most likely come in so many varieties to provide higher quality additional features to different industries, and to allow the customer to choose more compact or higher powered models, and choice depends on whether the item needing bending is a wire hanger, an "unbendable" girder, or something in-between.

Bending units are fairly inexpensive; the overall price is a meager $19.95, you can buy one for $30, then there's a $10 rebate and when you're done with it you can turn in the head for the 5 cent deposit. Of course, while a bending unit can be owned, others are free to wander the streets, vote, and be charged and jailed for crime. 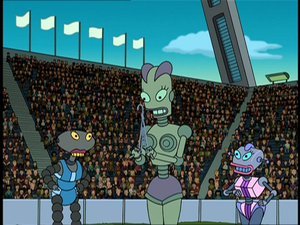 As with most robot classes, there are both male and female bending units. The main difference between the two is the type of oil used, and the apparent design of the robots to emulate the human sexes (i.e. fembots tend to have long eyelashes, higher voices, and a somewhat more feminine physique than manbots).

Female bending units are much weaker than male, and they have a separate class in the Olympics for bending. Working female bending units generally bend simpler constructions, such as clothes hangers, leaving the heavier work to the males. 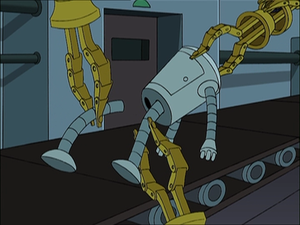 A bending unit is constructed on the assembly line. 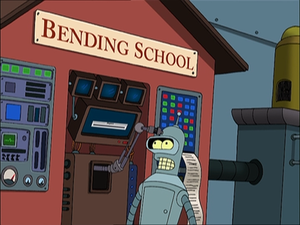 All bending units are programmed into the art of bending in a "Bending School" in the assembly line.

While a bending unit's main function is to bend girders, they can also have many secondary functions, either from when they were originally built, or from being installed or learned afterward. A list of some possible secondary functions are listed here.

Like many robots, bending units have seemingly human features in their personality. While Bender has argued that they do not have feelings, major anecdotal evidence has proved this wrong, and they even seem capable of love, both of other robots and of humans. They do not, however, have a sense of taste. Despite their lack of a sense of taste, in "Benderama", Bender chugged a bathtub full of water converted to alcohol. He remarked that it tasted "like fine cogniac with a hint of aged scrotum," This, however, could have been a joke. Like other robots, bending units need alcohol to function, or they will break down, similarly to the human behavior when drinking alcohol. Bending units also seem to have a generally abusive personality, easily falling into abuse of tobacco, electricity and partying.

Bending units are built on an assembly line in a factory, with the mechanical arms gaining the role as their "mother".

They go through different stages as they move along the line, starting out as small, baby-like robots and growing into adult-sized units, with the aid of the mechanical arms. While they are in their baby stage, they must be inspected to make sure that there are free of defects, and if they do have a defect, the unit must be recycled (6ACV06).

After their body is in the finalized, adult stage, they are programmed into the art of bending by inputting data from a computer by the "Bending School". After this, their mind grows out of their baby stage and they are able to speak properly like adults - they are complete.

Prof. Farnsworth: Your standard bending unit is made of an iron-osmium alloy. But Bender was different. Bender had a point-04% nickel impurity.
Bender: [crying] It's what made me me.

Bender: It's hopeless. We might as well turn in my head for the five cent deposit.
Fry: No way! I'm not letting my best friend get recycled. Not for five cents, not for five hundred cents!

As Bender appears in every episode and comic, only episodes with other units and references to them are noted here.