From The Infosphere, the Futurama Wiki
Revision as of 23:25, 1 September 2006 by Whaler on the Moon (talk | contribs)
(diff) ← Older revision | Latest revision (diff) | Newer revision → (diff)
Jump to: navigation, search 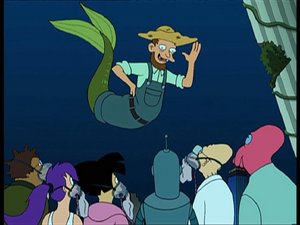 A Merfolk farmer greeting the crew

The Merfolk are a kind of human beings adapted to life in the deep sea, in the classical merfolk shape known from legend and fairy tale - human upper body and fishtail in the lower regions. They are descended from the human inhabitants of the lost city of Atlanta which chose to stay behind as the city sank under water, and in time developed to their current form with the help of the caffeine from the Coca-Cola bottling plant. Despite this evolutional leap, the population of Atlanta has not changed that much over the centuries and still retains the Dixie feeling of the old days. Even their clothing much resembles that of 20th century humans.

Of course, the Atlanta merfolk are a spoof of the merfolk from legend, the lost city of Atlantis and of Southerners in the USA.

In this area, the merfolk have certainly gained much distance to the original humans. The process of reproduction resembles that of fish: the female lays her eggs and then the male releases his fertilizer over them.