From The Infosphere, the Futurama Wiki
Jump to: navigation, search
Space Pilot 3000

The "Space Pilot 3000" article has been labelled the following levels:

Eye in the garbage can

Don't add it. Seriously. It's been added and deleted several times from this page. Nibbler's eye doesn't appear in the garbage can until Jurassic Bark. Simple as that. Don't add it.

Is it just me or does the guy who says "Pft! Tourist!" after Fry flies out of the tubeline sound a lot like Hank Azaria doing Carl Carlson's voice? I can't find anything to confirm this, but it sounds so much like him. Can anyone confirm this? --dotDarkCloud 17:29, 23 June 2008 (CEST)

Hm, I cannot find any confirmation. There is no credit on this character at all. Neither is it mentioned in the commentary, so my guess would be no. --SvipTalk 17:45, 23 June 2008 (CEST)

An idea I had touched months prior, and am now finally trying it out, I call it the cold opening of an article, similar to those on the show. The idea is that these episode articles start rather "rough", navigation, infobox and plot. No introduction. Sure, straight to the point is nice, but a short introduction, explaining the significances of an episode, a quite recap of its plot and mentions of its guest stars. I am opening this discussion for opinions. --SvipTalk 23:12, 3 November 2008 (UTC)

Overdue response, but I agree. I've always thought that a summary or something would be great at the start, something that goes over some key points or something, rather than just "here's what happens, blow-by-blow"--not everyone wants to read the whole thing to find out what the episode is about. --Buddy 00:31, 11 December 2008 (UTC)

Let me explain. How long is a year? 365 days? I don't think so. 365.25 days? That's better, but still not there. Leap days (every fourth year, unless that year is dividable by 100, but not if it is also dividable with 400) was originally created to take care of that problem. Problem is, that even with these fixes, the year remains somewhat off. So, they made leap seconds, every year, when appropriate, an additional second is added to the year. It may not seem like much, but it will actually make sure that the year cycles does not go out of hand.

But, a thing like a countdown on the freezer-tube, may take care of the leap days problem, but not the leap second issue. Thus, by a thousand years, the lack of increment every year for the countdown have left it half a day behind. There are some more precise calculations on this issue, but I couldn't find them. --SvipTalk 22:34, 10 December 2008 (UTC)

Most clocks also lose time. Since Applied Cryogenics is sort of a shoddy operation, they probably don't have super-expensive atomic clocks on-site. In fact, I imagine that the reason the "ding" sounds like that of a dinner timer is because it's probably built from one. Crappy clocks lose more time than good ones (even atomic clocks lose a second every million years or so). It's not inconceivable that the clock could've lost twelve hours or more in a thousand years. --Buddy 00:29, 11 December 2008 (UTC)

Ctrl+F and find this phrase in the article. Oddity! Perhaps removal or reworkification? --Buddy 01:12, 6 February 2009 (UTC)

My point was that it's in there twice. A phrase so rare shouldn't be overused. I once read a book where the author used "precipitous" five times. It was obnoxious. It was like he found it in the dictionary and wanted to use it as often as possible. Anyway, yeah. Repetition bothers me slightly. That's all. --Buddy 02:06, 6 February 2009 (UTC)

So in the trivia we've got "According to Groening, the inspiration for the suicide booth was the 1937 Donald Duck cartoon, "Modern Inventions", in which the Duck is faced with—and nearly killed several times by—various push button gadgets in a Museum of the Future. " as well as "Suicide Booths are taken directly from one of Sheckley's novels, Immortality, Inc."

By having both in, the implication is that Matt Groening says that Robert Sheckley was influenced by a Disney cartoon. In fact, the whole trivia section is full of claims that don't seem to have any proof behind them. As much as I love Red Dwarf, I never once thought that this in any way paralleled Lister being frozen for a million years, nor have I ever seen any official statements to that effect. As such, I'm taking out some of the more unlikely things, but I'm more than willing to discuss the possibility of them being correct and my being utterly wrong and pretentious.--Ozzie 13:34, 8 February 2009 (UTC)

So, I see we've got the ratings there, and we probably mentioned that it was the highest-rated pilot in fox history. I'm just wondering, does Futurama still hold this record? I'd be interested to know which shows knocked it from the top (if any). --Buddy 02:14, 17 April 2009 (UTC)

During both countdowns it's midnight - and dark - simultaneously everywhere around the world. Is there any indication of whether that is an oversight, or an intentional joke? -- the preceding unsigned comment was written by 86.175.39.135.

Both, actually. According to the commentary, David X. Cohen had the idea of the simultaneous countdowns in his head, and wanted it through, it was only afterwards he really considered the issues, but even then, it was too cool to go amiss. So while they admit it is not possible, they were well aware of that before they put it in, so I suppose "internal joke" is your answer. --SvipTalk 00:06, 5 May 2009 (UTC)
If I'm not mistaken (and I may be), I think they mentioned it in the commentary. As for fans, we can always pretend there were time cuts between them, showing scenes from the twenty-four different time zones... or something. --Buddy 00:07, 5 May 2009 (UTC) 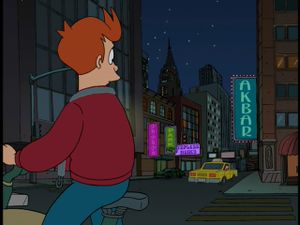 The Trivia section says that Fry passes a sign in Chinese, which, when translated, says "fire" and "women", probably meaning "hot women". That is not actually correct. The sign reads 少女, not 火女, which in Chinese means young lady, maiden or virgin. The same characters in Japanese carry the same meaning as in Chinese. --