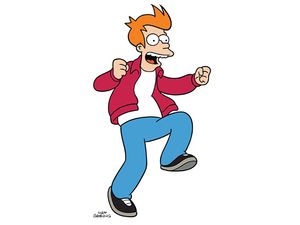 The tale of Fry's past is a story arc on Futurama. It is highly complex, as Philip J. Fry himself understands very little about what is happening to him.

Fry grew up in New York with his parents and his brother. He often fought with his brother. One time he found a seven-leaf clover, which gave Fry an incredible amount of luck and helped him beat his brother in many tasks. After Fry got frozen in 1999, Yancy found the clover and gave it to his son, Philip J. Fry II, who was named in Fry's honour.

Unfortunately, that event was to occur sometime in 3004, and Philip J. Fry would not be able to live that long. Therefore the Nibblonians decided to freeze Fry against his will for a thousand years on 31 December 1999.

However, the cause of Fry's lack of the delta brain wave is something that occurred in 1947, although Fry experienced it much later. In 1947, Fry accidentally killed the man he thought to be his grandfather, Enos Fry, and soon after impregnates Mildred Fry, his grandmother, who eventually gives birth to his father.

When Fry discovered what the Nibblonians had done to him inside the Infosphere, he decided to travel back in time to change history. However, Nibbler at Applied Cryogenics (where Nibbler offhandedly mentioned "the other") convinced Fry to stay in the future, and a thousand years later he successfully destroyed the Infosphere.