A wrist device is a device worn on the wrist which has a wide variety of functions.

The device itself is never actually referenced by a specific name, only Leela has referenced it several times, yet those descriptions tend to be non-specific like "this thing", "this thing I wear on my wrist", "my wrist-ama-jig" or "my wrist thingy". She once refers to it as a wristlojackimator (2ACV11), which may in fact have been referring to the tracking beacon function she was using at the time ("wristlojackimator" contains the phrase "lo-jack"—a popular anti-theft tracking device for 20th-21st century cars), and thus not the actual term for the device.

Wrist devices may in fact have independent artificial intelligence, as Leela's detaches itself and leaves during the 3001 Robot Uprising incited by Mom on Mother's Day, and tells her she should wash her wrist more often.

These multi-functional devices are operated by means of buttons and voice commands. They are available in a variety of models and colors.

In one episode Leela uses a laser beam device on it to reattach Fry's nose (it also burnt his skin). It may be that it is a weapon laser, which she had set to stun, or it is simply a tool for starting fires, cutting and welding.

They may have been inspired by the tricorders from Star Trek.

They are similar to the Pip-Boys, devices containing text information, maps, vital signs, and more in the video game series Fallout. 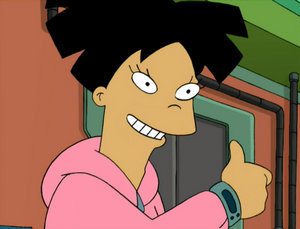 Leela wears the wrist device in every episode of Futurama, so this list only shows when it has a special appearance, for example when a new feature is revealed, when it is mentioned by a character, has a part of the plot, or is used by a character other than Leela.