From The Infosphere, the Futurama Wiki
(Redirected from Universe Gamma)
Jump to navigation Jump to search 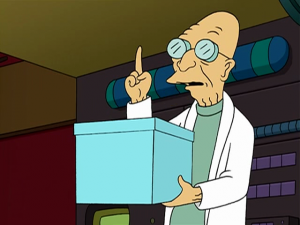 "Correct, this box contains our own universe!" [4ACV15]

This universe, known by Yivo, an exo-universal being, as Universe Γ (gamma) and briefly by the crew of Planet Express as Universe A (to avoid confusion with universe 1) is the primary location of all that is, and the entire sum of all history. The universe was created in the Big Bang, and will end into another Big Bang creating a universe identical to the previous one. This will happen in the year 10 E 40.

There exist other universes, however, which are all described in comparison to this universe, ranging from subtle differences to the extreme.

For the longest time, only a single other parallel universe, a cowboy universe, was known to exist. It remains unknown if the Planet Express crew informed the world about the discovery/creation of many more universes. [4ACV15]

By the 31st century, despite the edge of the universe having been reached, there still seems to be a tremendous amount of unexplored territory left. In 3002, Professor Farnsworth proposed moving a star system so that "their gravity might just divert the Chronitons to the empty side of the universe", [3ACV14] implying that a vast portion of the universe is either entirely vacant, or at least devoid of all life. In 3011, the entire universe was briefly Bender's processor. [6ACV25]

Technically, this universe appears in every episode/comic/film of Futurama, but this list includes appearances that are important to the nature of the universe or the universe itself being referenced in particular way (primarily in speech).