Philip Joshua Fry is the advisor of Al Gore during the 2000 Presidential election.

As the vote in Florida is being counted, Philip Joshua Fry is informing Al Gore that he is likely to win the election. But due to Bender's hunt for Philip J. Fry, he interrupts and starts shooting after Joshua Fry (after Al Gore discreetly points to him when Bender yells "Philip Fry?!").

He runs out of the room, which leads to Bender shooting the basket with the ballots for Al Gore, and thus losing the important votes to win the election. 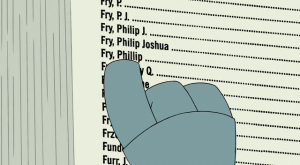 Frys listed in the phone book.