The League of Robots is a secret organization of robots, held together with the main ideals of protecting the honor of robots everywhere, and the killing of all humans. However, it is revealed that no humans had actually been killed by the league for around 800 years prior to 3008 (and the human that was killed was a sick girl scout).

The members of the League call themselves "Leaguey Weagueys", and their main activities involve lounging around a fireplace "blathering". The initiation test for new members of the League involves a series of challenges which require the drinking of a variety of different types and quantities of alcoholic beverages, the initiate ascending a single step towards the top of a staircase for each beverage drunk. Such "challenges" include a flagon of wine and one drop of a 1000-year-old, infinitely-priceless brandy. Where matters of honor between two robots are concerned, they challenge each other in a possibly destructive duel with each side wielding a weapon specified by the challenger. No human is permitted to set foot in the League of Robots Headquarters.

The League of Robots is also the name of a TV show aimed at young robots, and as a result its existence is widely dismissed.

The League's most recent known member, Bender Bending Rodríguez, once tried to strictly enforce the "no humans" policy within the League, gaining a favorable reputation amoung the League for his apparent hatred of them. His reputation was soon ruined after he was seen helping his human friends, so he challenged the leader, Calculon, to a duel which partially destroyed the League's headquarters. In the ensuing aftermath, Calculon resigns his position as leader, surrendering the title to Bender Bending Rodríguez. 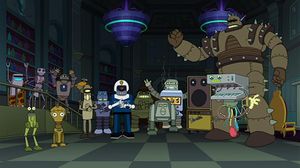 Members of the League of Robots