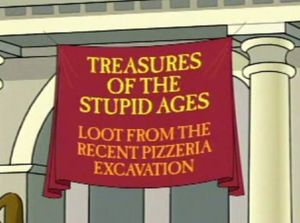 An example of the usage of "Stupid Ages" as seen in the episode "Jurassic Bark".

The Stupid Ages, as defined by people from the 31st century, refers to a very general and ill-defined time period that took place sometime in the 20th or 21st century. The exact time period of the Stupid Ages is unknown but, judging by its usage, it is the time period in which Philip J. Fry lived. In "Jurassic Bark", the exhibit "Treasures of the Stupid Ages" at the Museum of Natural History had many relics including Fry's dog Seymour Asses. The exhibit also suggests that it took place in the 20th century; however, it could also include the 21st century as Panucci's Pizza lasted up to at least 2012.

Fry: Man, all the fun has been taken out of this once noble barfapalooza.
Leela: You just say that because you're primitive. People in your day were backwards and crude.
[7ACV08]

Appearances of the term, not the ages themselves.