From The Infosphere, the Futurama Wiki
Jump to: navigation, search
Supported canon

Space Boy in Outer Space is a series of comics focused on a sci-fi action hero that launched in or before 1979 and spanning at least 150 issues. Space Boy was Fry's favourite comic as a kid and he continued to read it while working at Panucci's Pizza. In the 31st century Frank Miller's head wrote a re-imagining of the series entitled The Dark 'Naut Returns Overdue Library Books. Shortly afterwords, production on a film starring Calculon and Fry as Space Boy was started but canceled after the script was leaked. 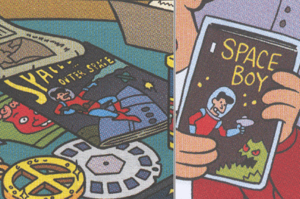 The comic in the comics