The nerdy teens were two members of the A.V. Club at Fry's presumed high school in the storyboard for "Space Pilot 3000". They are simply titled "nerdy teen" and "less nerdy teen" in the storyboard, with neither teen directly identified and with little else known about them. When Leela viewed Fry's life on the biographic projector, she sees Fry asking to join the A.V. Club. The nerdy teens rejected him, after having done so multiple times before, and then told him to stop going around telling others that he was in the club. 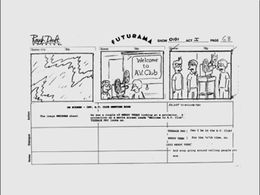 The entire scene with the teens.

Fry: [As a teenager.] Can I be in the A.V. Club?
Nerdy teen: For the nth time, no.
Less nerdy teen: And stop going around telling people you are.