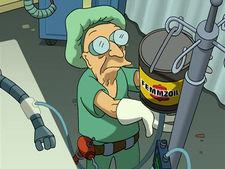 Femmzoil is the robot fluid found in fembots, and the opposite of testosteroil. Bender had this for a brief time when he became Coilette during the 3004 Olympics so that he could take away 5 gold medals (4ACV13).

Farnsworth: Dear Lord! A coaster! The Femmzoil must be sachet-ing girlishly into your processor.

Since Femmzoil is a main component of fembots, it technically appears in many episodes. This list only deals with significant appearances.