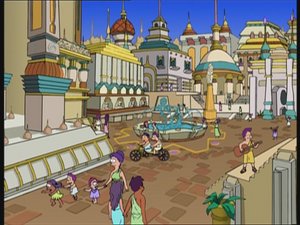 The city as it used to be and the cyclops of "Cyclopia". They're seen in Alcazar's story, so they're not real

"Cyclopia" was the name used by Alcazar for the planet he lived on. Due to Alcazar's nature, it is highly disputed what the real name or real history may be. Alcazar claimed the planet was the cyclopian's (and in extension to that, Leela's) homeworld. Accordingly to his tales, the eyeless mole people of Subterra 3 shot missiles in all directions in hope of hitting "Cyclopia", because they were jealous of its people's visual prowess. Supposably, the missiles hit 40 planets, one of them being Cyclopia. This was the explanation for why the capital city, "Cyclops City" (which name may also be disputed), among its civilization was in ruins.

The only real facts about "Cyclopia" are: 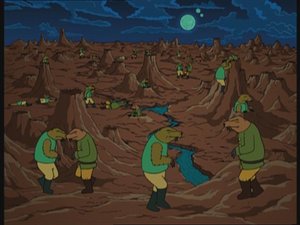 Since Alcazar made up the story of Cyclopia, it is also possible that Subterra 3 and its inhabitants are made-up and don't really exist.