Calculon Is HAL 9000 was a one-man show in which Calculon portrayed the Space Odyssey character HAL 9000. [7ACV20] It was performed in 3013, because of Calculon's decision to resurrect his career, at the Shubot Theater, and was seen by Fry, Leela, Bender, Professor Farnsworth, Hermes, Zoidberg, and Amy, among others. HAL tells his life story to his old friend Dave.

After the show, Fry, Leela, Bender, and Calculon went to the restaurant The Tragic Pan, where they read headlines concerning the show's reception.

Calculon's one-man show was first seen in a promotional picture released by Countdown to Futurama, in May 2013. [1] 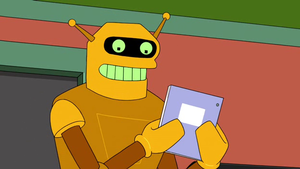 Calculon holding the script for his one-man show, in the Planet Express employee lounge.

Calculon: I'll have to start at the bottom...
Fry: But Fox already said no!
Calculon: I mean live theatre! I wrote this one-man show years ago, but I . . . I never cared enough to perform it.