For other uses, see Academy (disambiguation).

The 1074th Academy Awards were held in Los Angeles in 3002, hosted by Billy Crystal's head, and attended by, among the most notable, Florp, Joan Rivers' head, Jack Nicholson, Harold Zoid, Calculon, and Dr. Zoidberg. [3ACV08]

Best Cinematography in a Non-Visible Spectrum 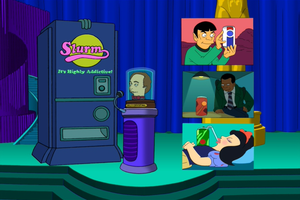 Announced by the soda machine Robot. 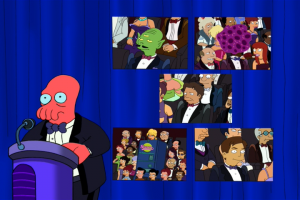 Dr. Zoidberg: And, instead of the fifth guy, Calculon, for his powerhouse performance in The Magnificent Three.
Man #1: Uh-oh. He read the wrong name.
Man #2: [whispering] Shh, just play along, like they did for Marisa Tomei.