The Vampire State Building is the tallest building in New New York. It has 240 floors, and there is a clock on it.

In 3013, Fry rented the roof garden on top of the building, because he wanted the moment in which Leela would agree to marry him to be special. [7ACV26] He asked her to be there at six thirty. However, as his watch was fast, he thought that she was not coming, so he jumped off. In actuality, though, she was on time, having arrived five minutes earlier. The two returned there many years later, after Fry accidentally froze the universe, and drank the champagne that a janitor — János — had poured when Fry rented the garden. They were then joined by the professor.

Leela: Fry. What's happening? Did you fall off the building?
Fry: Actually, that's kind of a funny story... 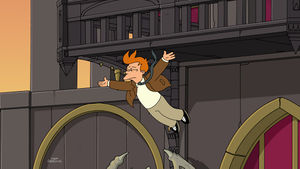 A promotional picture of Fry falling from the Vampire State Building, released by Countdown to Futurama, in June 2013. [1]