Talk:Fear of a Bot Planet

Ever since I have watched this episode the first time, I always thought the mirroring of Fry in the helmet, which looks a lot like the characters on Family Guy and his comment "we look stupid" was a clear mocking of Family Guy, which even at that time was seemed as a copy of The Simpsons.

But people told me that they could never have made that reference, cause there was no time to do so.

After checking the air dates for each, this episode aired 20 April, 1999, while the pilot of Family Guy aired 31 January, 1999. There is a large month gap, where the reference could have been inserted quickly at animation stage. I cannot see it should be anything else, otherwise the scene seems very unnecessary. Opinions? --SvipTalk 13:23, 28 March 2009 (UTC)

So, Fry in the helmet looks like characters in Family Guy? I don't see it myself. — Chris of the Futurama 2 [ discuss | contribute ] 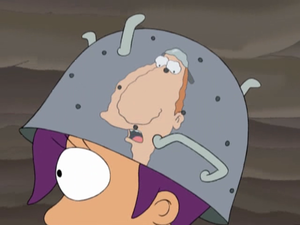 Ohh, now I see it. Yeah, that looks like a Family Guy reference to me. Looks kinda like Lois.
— Chris of the Futurama 2 [ discuss | contribute ]

Anyone knows what the Robonukah song is that Bender is playing from his ghetto blaster in the end of the episode?