Originating from Cygnos 5, the Cygnoids aren't educated in human culture which explains why they can't cook human food. They are generally disliked by prejudiced humans such as the Professor. A group of Cygnoids which came to Earth opened a pizza shop owned by Blek and his wife in New New York, which was not so good since their food was disgusting due to a lack of understanding of humans, with such pizza ingredients such as asbestos and silt. 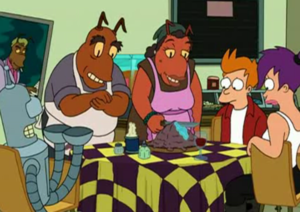 The Cygnoids who came to Earth and opened their own pizza shop, showing Fry, Bender and Leela the disgusting food

Blek: We come to Earth to make pizza, not money.
Blek's wife: No Blek! Other way around!