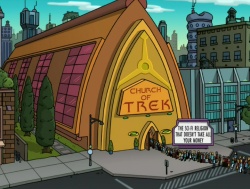 In the 23rd century humanity made its first contacts to alien species, one of them being Decapodians. Scientists also increased the speed of light, to get around relativity. Technological development was very fast (which can be explained with that aliens gave technology to humans). Head in a jar technology had been developed in this century. Star Trek also became a major religion, but was later banned.