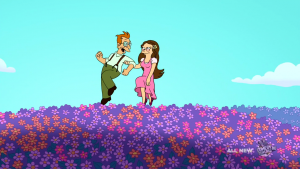 Unit 47 is a robot who collaborated with Professor Farnsworth as a chemist working to create a virus that would destroy an infestation of posies in his youth and became his robosexual lover. She eventually left him for another robot after 43 years together. These events left the professor loathing the idea of robosexuality, leading to his objection against Proposition ∞ in July of 3010.