Difference between revisions of "The Luck of the Fryrish"

"The Luck of the Fryrish" is the thirty-sixth episode of Futurama, the fourth of the third production season and the tenth of the third broadcast season. It aired 11 March, 2001 on FOX. Philip J. Fry discovers that he is not only person by that name, and suspects his brother of stealing his name, but in the end Fry discovers that his brother named his son in Fry's honour.

In Old New York, sometime in the 20th century, Mrs. Fry is in labour. However, her attention seems to be on her portable radio, which is tuned in to a Mets game. Yancy Fry, Sr. names the child Philip, after those screwdrivers. Yancy Fry, Jr. is jealous of the name, but his father informs him that he's named after a proud line of Yancy Fry's. Yancy Fry, Sr. leaves the room, and Yancy steals a rocketship from a mobile hung over Philip's crib.

Back in the year 3000, the crew is attending the horseraces. Fry does horribly with his bets. Amy is with her parents in the luxury box, and, in their constant quest for grandchildren, they attempt to set up Amy with their best jockey. Leela and Hermes go to the concession stand for some horse-themed (and horse-derived) food. Meanwhile in the stables, Bender is drugging the horses with a hypo-spray. He is interrupted by a jockey, but drugs him as well. Fry prays to the horse-god in hopes of winning the final race, but his horse falls asleep due to Bender's drugging. Fry proclaims that he'll hold on to his last dollar, which then blows away. It lands on a power line, and after Fry is unable to reach it, he tries again with a rake. But lightning strikes the rake and electrocutes him. He seems only slightly hurt, but lightning strikes twice, knocking him from the telephone pole. He lands in a garbage can, and the concession stand cook dumps trash on top of him.

In the past, Yancy and Philip are trying out for a breakdancing troupe, who wish to win a competition, which gives parachute pants as a prize. After Philip's tryout, Yancy does the exact same routine, with poorly-disguised names. To show up Yancy, Philip performs the septuple headspin, three more rotations than the previoius record. Yancy then attempts to steal the clover from Philip, but Philip runs home.

Fry determines to get his clover back, and assumes it might still be at his old house. In the ruins of Old New York, Bender mounts the subway tracks and Fry and Leela hop aboard. They arrive at Newkirk Avenue, a station in the Flatbush section of Brooklyn. While walking through Fry's old neighborhood, Fry reminisces about the past, and meets one of his old neighbors. They arrive at Fry's old house, which, although in horrible condition, seems to have survived the alien attacks without damage (or at least, without further damage).

Fry, Bender, and Leela enter the storage room, and after the lock on the vault proves to be jammed, Bender opens it by oscillating on the structural resonance frequency of the vault. But Fry finds that the clover (as well as whatever else was hidden within the record sleeve) is missing. They leave Fry's house in defeat, but before they can leave the ruins of Old New York, they come upon a statue resembling Yancy, but with an inscription reading "Philip J. Fry"—and Fry's seven-leaf clover in his lapel. In rage, Fry strikes the statue, injuring his hand (Fry rants "He stole my life...and he broke my hand!", to which Bender quips "His legend lives on!").

Somehow, they bring the statue back to Planet Express, where they learn about the person immortalized by the statue. A video on the internet shows Philip J. Fry's life. After a string of good luck, including being the first person on Mars, it is shown that he was buried with the clover, so it could bring him luck in the next life (perhaps, some Egyptians believe). Fry decides they should go to the cemetary and dig up the body to retrieve his clover. 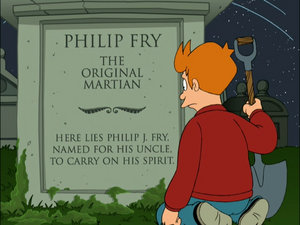 On the Orbiting Meadows Cemetary, Fry, Leela, and Bender arrive at the gravesite, and begin digging. While digging, Fry knocks loose a chunk of moss from the tombstone.

While Fry is reading the inscription he uncovered ("Here lies Phillip J. Fry. Named for his uncle, to carry on his spirit"), realising the grave is not his brother's, but his nephew's, Bender strikes the casket and emerges with the clover (and his wedding ring). Leela, however, understands that Fry needs a moment alone, and sets off with Bender. Fry replaces the clover in his nephew's grave.