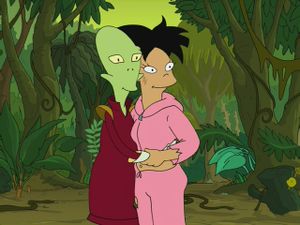 A smizmar is the love partner in Amphibiosan culture. Unlike a mate, the smizmar may not necessarily be the parent of the offspring. When an Amphibiosan loves another individual (i.e. their smizmar), they enter a "receptive state", in which their skin becomes a semi-permeable membrane, which allows the passage of genetic material.

During this state, Amphibiosans should be extra sensitive to whom they touch, as anyone's touch can produce the pregnancy. Usually, the smizmar would be the biological parent, but in some cases, it may be someone else. However, regardless of contributor, the smizmar is always viewed as the parent in Amphibiosan culture.

An issue of this complexity it can cause is evident in "Kif Gets Knocked Up a Notch", wherein Kif enters the "receptive state", because of his smizmar, Amy. However, during an unfortunate event in the bridge of the Nimbus, Leela ended up giving Kif this genetic material.

The concept is also apparent in the film When a Man Loves a Smizmar.

In the Season 2 episode "Raging Bender", seemingly before the final definition of the word was decided, smizmar is some sort of gender. The MC at the boxing match announces, "Ladies and gentlemen and smizmars, welcome to tonight's main event!" In the same episode, the marquee of the movie theater advertises the film When a Man Loves a Smizmar. This usage occurs again in the Season 7 episode "The Thief of Baghead".