From The Infosphere, the Futurama Wiki
Jump to navigation Jump to search
The printable version is no longer supported and may have rendering errors. Please update your browser bookmarks and please use the default browser print function instead.

The New York Post was a newspaper published daily in Old New York. It was the oldest newspaper in the United States to be continuously published, starting from 16 November 1801 until at least the 21st century. It's spotted in a newspaper vending machine outside of the building where Applied Cryogenics is housed, the same vending machine Fry chains his bicycle to before it is stolen by the bike thief (1ACV01). Later, when Fry goes into Old New York in search of his seven-leaf clover, he stands on a New York Post vending machine which has turned on its side to proclaim that Howard Stern is overrated (3ACV04). 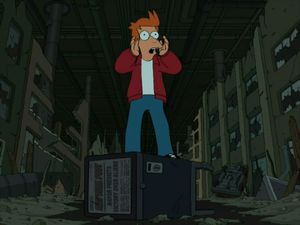